Mileena (played by Dana Hee) is a minor villainess from the 1997 film Mortal Kombat: Annihilation. The film is losely based on the Mortal Kombat video game franchise, in which Mileena is a recurring female ninja character who is an evil sister/clone of the heroine Kitana.

In the film, Mileena appears in a single scene only. Her name is never mentioned (although she is referred to as Mileena in the end credits) and she speaks no more than two words. Wearing a black pants variant of her typical magenta leotard complete with her mask and twin sais, Mileena attacks the heroine Lt. Sonya Blade (played by Sandra Hess) in a remote, outback location, until she is defeated and killed.

Sonya Blade at first mistakes Mileena for her good twin sister, Kitana, to which the villainess replies, “You wish” (two words, as previously stated), probably implying the she intends to kill Sonya. Benefiting from Sonya’s surprise, Mileena at first dominates the fight by kicking her off a small cliff and landing on a rock.

While Sonya's recovering Mileena does a skillful flip to her and tries to attack her with the sais. Mileena then pulls Sonya's hair causing her to scream in agony, Mileena then knees her in the stomach making Sonya winded; Mileena throws her on the rock and strikes. However, by a series of skilled moves, Sonya successfully disarms her attacker, and hand on hand combat follows. Sonya seems to overcome Mileena in this respect, and she gains the upper hand.

The film makers thought it wise to include a strong element of mud fight into all this, and both women get seriously mucky as they try to bring each other down. Sonya kicks Mileena in the mud, but Mileena kicks Sonya twice and prepares for a third kick but is denied by Sonya. Finally, Sonya gives Mileena a few kicks and punches into the face and stomach, whereas the villainess now fails to hit back in the same measure. However, Mileena grabs Sonya and brought her in a arm hold but Sonya breaks free. After throwing the evil Mileena on her back by a forced salto, Sonya keeps her grip on her and gets ready for the fatal blow.

Facing imminent termination, the villainess panics and desperately tries to free herself from Sonya’s clutch by helplessly twitching around in the mud, with no success. Sonya mercilessly kicks her foot against her would-be assassin’s face. The blow causes Mileena to die instantly, with her body flung sideways so that she lands on her belly, face down in the mud. A tattoo on her shoulder then transforms itself into a small dragon, which quickly flies off. 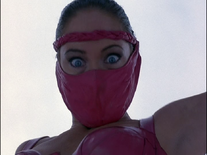 Knee to the stomach

Mileena about to strike Sonya with her sai

She misses and her sai get's stuck

But Sonya catches it

Both rolling in mud

Mileena about to punch Sonya

Add a photo to this gallery
Retrieved from "https://femalevillains.fandom.com/wiki/Mileena_(Mortal_Kombat:_Annihilation)?oldid=193991"
Community content is available under CC-BY-SA unless otherwise noted.