Start a Wiki
watch 01:21
The Loop (TV)
Do you like this video?
Milady de Winter (Faye Dunaway) was a secondary antagonist in the 1973 movie "The Three Musketeers" as well as the 1974 sequel "The Four Musketeers: Milady's Revenge".

Milady is under the employ of Cardinal Richelieu (Charlton Heston), working as his spy, assassin, and messenger.  She steals the jewels that Anne of Austria (Geraldine Chaplin), wife of King Louis XII (Jean-Pierre Cassel), entrusted to her lover, the English minister Duke of Buckingham (Simon Ward).  Luckily the intended scandal was averted.

D'Artagnan (Michael York) himself later meets Milady and falls under her spell, though he also pursues an affair with her maid, Kitty (Nicole Calfan).

When the French troops lay siege to the Hugenot city of La Rochelle, the Duke of Buckingham leads an unsuccessful expedition to assist the besieged.  In a house near La Rochelle, Athos and his friends Porthos (Frank Finlay) and Aramis (Richard Chamberlain) overhear a conversation between the Cardinal and Milady, plotting to kill Buckingham before he can make another attempt.

Even if he is the enemy of France, the musketeers regard Buckingham, the man, as a friend.  They commit treason to the crown, and thus warn him of the threat and upon arriving in England, Milady is arrested and imprisoned in a house by her hostile brother-in-law, the new Lord de Winter.

However, Milady seduces her jailer, John Felton (Michael Gothard), persuading him that she is a Puritan at heart and that Buckingham is persecuting her because she refused his advances.  Felton has his own grievances against Buckingham, whom he blames for his lack of promotion in the army.  He thus proceeds to murder the Duke, but after carrying out the murder he is aghast to see Milady's ship sailing away without him.

Returning to France, Milady murders D'Artagnan's lover, Constance Bonacieux (Raquel Welch).  Constance is Queen Anne's seamstress and confidate.  The musketeers and Lord de Winter hunt Milady and track her to Lille, where she is beheaded after a mock trial. 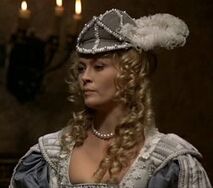 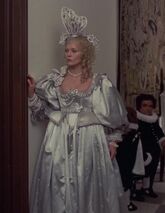 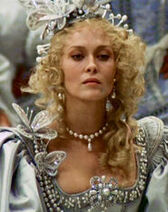 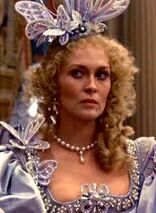 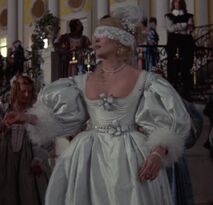 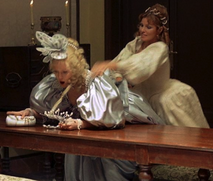 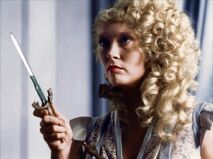 Add a photo to this gallery
Retrieved from "https://femalevillains.fandom.com/wiki/Milady_de_Winter_(The_Three_Musketeers)?oldid=166258"
Community content is available under CC-BY-SA unless otherwise noted.