Start a Wiki
watch 01:38
The Loop (TV)
Do you like this video?
Michelle Richmond (Anita Majumdar) is a villainess from "The Son Also Rises", episode 2.04 of Republic of Doyle (airdate February 2, 2011). She was a hitwoman hired by Tommy Windsor, the CEO of the T.W. Group, who took the identity of an environmental lawyer at law firm Bartlett & Morgan as a means of avoiding suspicions.

Prior to the episode, it's suggested that Tommy enlisted Michelle to kill his wife Lucy, with T.W. Group employee Christian Doyle being framed by Tommy for the murder. During the episode, even after Tommy was murdered during an argument with his cohort/former mistress Trudy Spencer, Michelle continued going through her hit list, going to the home of Tommy's silent partner Durham Fowler and attempting to kill him via hanging.

Jake Doyle (who was investigating Tommy's death to clear his brother's name) showed up at Durham's house and saved him from dying, spotting Michelle as she was leaving the house. Later on, Jake confronted Michelle in her car and demanded to know if she'd tried to kill Durham, only for the villainess to claim she had simply walked in to find Durham hanging and left, while also offering to defend Christian pro bono. The truth about Michelle's identity was revealed when Jake called Bartlett & Morgan, finding out that the real Michelel Richmond was at her office in Toronto.

Michelle was later revealed as a hitwoman when Jake discovered Tommy's hidden burner phone and called the only number it contained. The number was shown to be for Michelle's phone, who received the call while she was in the midst of killing a hospitalized Durham. Michelle hung up the phone when Jake didn't respond to her request for a security number and fled the scene, with Jake arriving too late to save Durham. With the help of his father Malachy and Malachy's girlfriend Rose Miller, Jake learned that the numbers on Michelle's phone corresponded with the people Tommy had had killed, with Christian being among the names.

Wanting to find Michelle before she found Christian, Jake faked a call over police radio (which Michelle was listening to) and claimed Christian was being transported to an isolated road. Jake approached Michelle at the location, with Michelle pulling out a gun and firing a few warning shots around Jake. During their confrontation, however, Michelle concurred with Jake's assertion that Michelle hadn't known Tommy Windsor was her client and that she hadn't killed him, stating that it would be "bad for business". Michelle then ordered Jake to turn around and fired one last shot near Jake, stating that Christian and Trudy were "two very lucky people" to have avoided being killed by her before fleeing the scene. 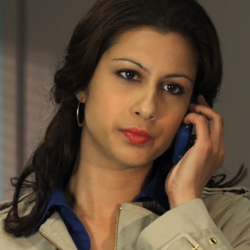 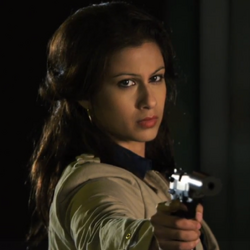 Michelle holding Jake Doyle at gunpoint
Add a photo to this gallery
Retrieved from "https://femalevillains.fandom.com/wiki/Michelle_Richmond_(Republic_of_Doyle)?oldid=147231"
Community content is available under CC-BY-SA unless otherwise noted.