Start a Wiki
watch 01:48
The Loop (TV)
Do you like this video?
Michelle Ito (Lourdes Faberes) was a villainess from "Mrs. and Mr. Trowbridge," episode 1.04 of Whiskey Cavalier (airdate March 20, 2019). She was a villainous assassin who inserted herself into the wedding reception of Iona Zimbrean, the daughter of General Andrei Zimbrean--who was suspected of various war crimes.

The Whiskey Cavalier crew entered the reception looking to capture Zimbrean, with Frankie Trowbridge and Will Chase posing as Mary and Dan Fleming, respectively--with "Dan" being the friend of Iona's fiancee. The duo spotted Michelle, with Will revealing his professional past with her, after which Michelle walked up to Will and asked if she recognized him, with Will denying her claims. Suspecting that Michelle could blow their cover, the pair placed Jai Datta's nanobots into Michelle's drink so they could track her.

Michelle went to the women's locker room, leading to Frankie striking up a conversation with the villainess before the women began brawling. Just as Will entered, the evil Michelle held Frankie at gunpoint, while commenting that Will looked better with a goatee, revealing her memory of Will. Afterwards, Will removed Michelle away from Frankie and slammed her into one of the lockers, with a sharp hook stabbing her head and killing the evil assassin. 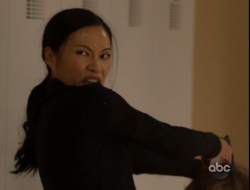 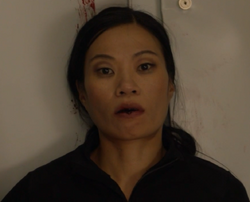 Michelle after her demise
Add a photo to this gallery
Retrieved from "https://femalevillains.fandom.com/wiki/Michelle_Ito_(Whiskey_Cavalier)?oldid=147458"
Community content is available under CC-BY-SA unless otherwise noted.