Start a Wiki
watch 01:50
The Loop (TV)
Do you like this video?
Michelle Cantwell (Crystal Lowe) is the main villainess of "No Rest for the Convicted", episode 6.02 of Republic of Doyle (airdate October 22, 2014). She was the head of investment firm Cantwell Securities, which Carl Maher made an $800,000 investment with after sleeping with her. After bailing Jake Doyle out of jail, Carl enlisted his help in getting his money back from Michelle, believing she'd stolen his money. But upon being confronted by Jake and Carl at her firm, Michelle adamantly assured Carl that everything would work out with his investment.

In actuality, however, Carl's accusations against Michelle were shown to have merit, as Michelle's business was revealed to be a front for a Ponzi scheme. Michelle had been stealing money from all of her investing clients, conspiring with securities commissioner Phil Cooper to falsify documents to cover up the scam. Michelle also briefly tried to seduce Jake into joining her business, along with her friend Crystal Maher, her friend and newest broker.

After learning that reporter Sam Pittman was investigating her firm, the evil Michelle killed him to prevent him from exposing her. Michelle went about doing so while Crystal was meeting with Sam as he was posing as a potential client, poisoning the wine they had. The conniving villainess also poisoned Phil in an attempt to cover her tracks, with Phil collapsing as Jake and Carl confronted him after uncovering his and Michelle's scam (he was ultimately left in a coma, but survived). Jake then went to confront Michelle, finding her being held at knifepoint by Crystal, who was angry at her for scamming Carl and setting her up for Sam's murder.

Michelle confessed to everything; stating that she killed Sam because he was getting too close to the truth, and adding that Phil was becoming too greedy, and later attempted to appease Crystal by giving her a million dollars she'd stolen from other investors. However, Michelle turned heel by pulling out a pistol and shoving Crystal aside, and also holding Jake (along with Malachy and Carl, who had run in during the confrontation) at gunpoint. Crystal, however, hit the gun with the bag of money as Michelle fired, resulting in the bullet non-fatally hitting Carl. Jake then disarmed Michelle, who was then placed under arrest (off-screen). 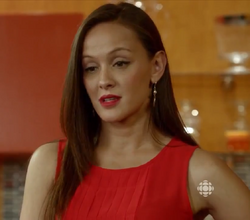 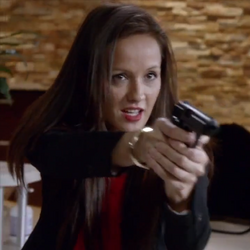 Add a photo to this gallery
Retrieved from "https://femalevillains.fandom.com/wiki/Michelle_Cantwell_(Republic_of_Doyle)?oldid=173437"
Community content is available under CC-BY-SA unless otherwise noted.