The protagonist, young womanizing swordsman named Takeru Yamato, loses a drinking bet to the big man Baan who sends him to deliver a scripture to a small town of Phoenix. When Takeru, who had delivered the scriptures, stayed overnight at the inn to wait for Baan to arrive, all the town's girls disappeared. It turns out to be a curse of the witch who rules the town.

Half year ago, a woman named Mesaayna came there as a healer and earned the trust of the townspeople before showing her true nature and taking over Phoenix. 300 years ago the place once was a battleground in the fierce fight between the all-female demon clan of the Witches and the male clan of the Dragon Knights, and the Witches have been almost exterminated. Their sole descendant, Mesaanya, now hates the Dragon Knight clan and all men. The town's elder pleased her by ridding it of young men, swearing that men and women would never get together, and she retired to the Witch Tower on the edge of the village. However, the elder's daughter Kate and the younger boy Pietro from the neighboring town fell in love, risking the witch's wrath. The elder, who cares for her daughter, looked for a way to defeat Mesaanya. And the way to do it was with the scroll that would weaken the witch's power and which Burn delivered by Takeru. However, when Mesaanya learn about that, the scroll is taken away and all the girls were kidnapped and turned into monsters protecting her tower.

Takeru heads to the tower to rescue the girls and to find Mesaanya, who initially is believed to await on the top floor of the tower, and end her threat forever. He also needs to collect the three parts of the scroll to expel Mesanya from Kate's body, the legendary Falcon Sword that can destroy the witch, and the Genji Armor that can withstand her spells. he is soon joined by Baan, and later also by Sophia, a mysterious priestess who uses her knowledge of magic to fight enemies. 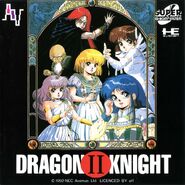 Retrieved from "https://femalevillains.fandom.com/wiki/Mesaanya_(Dragon_Knight_II)?oldid=197405"
Community content is available under CC-BY-SA unless otherwise noted.