Start a Wiki
watch 04:10
The Loop (TV)
Do you like this video?
Mermaid (Natasha Wilson) is an unamed minor villainess in the 2013 episode "The Heart of the Truest Believer" for the TV series "Once Upon a Time".

A school of mermaids are attacking the ship the Jolly Roger.  Snow White (Ginnifer Goodwin) and Emma Swan (Jennifer Morrison) throw a net overboard, and catches one of the Mermaids.  The Mermaid starts flapping about like a fish out of water, as she lies on the net that imprisons her.

Capt. Hook (Colin O'Donnoghue) commands they get the mermaid off his ship, but Queen Regina (Lana Parrilla) tells them they now have a hostage.  David agrees with Hook, since the mermaids just tried to kill them.

The Mermaid picks up a conch and blows it, causing a deafening sound, which privides a signal for something the crew is unaware of.  She then seductively asks David to release her.

Emma argues to let her go, but Regina counters that if they let her go, the rest of the mermaids would just come back to kill them.

David picks up a sword and points it at her neck, ordering her to call of the storm that seems to have begun once she used the conch.   Charming begins to strangle her neck, and Regina tells them to "filet the bitch".

After letting the Mermaid go from the choke hold and sword, the storm continues to grow.

Emma tells them that they need to think things through.  However, Regina, finally announces that she already has.  She waves her hand and magically transforms the beautiful mermaid into a wooden statue of herself.  Regina says that should stop the storm, but quite the opposite happens.

Eventually, Emma makes the connection between the storm and their own stormy behavior, and she gets the gang to copperate and work together, thus making the storm disappear. 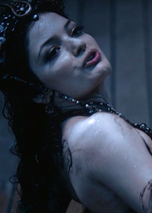 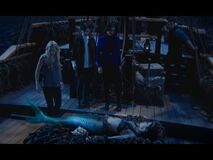 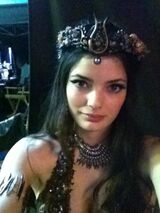 Add a photo to this gallery
Retrieved from "https://femalevillains.fandom.com/wiki/Mermaid_(Once_Upon_a_Time)?oldid=158531"
Community content is available under CC-BY-SA unless otherwise noted.