Start a Wiki
watch 01:38
The Loop (TV)
Do you like this video?
Melinda Stone (Bellamy Young) is the main villainess from "Split Decision," the antepenultimate episode of NCIS' first season (airdate May 11, 2004). She is an ATF agent who posed as the operator of a pawn shop, and she encountered DiNozzo during his undercover sting, which ended with Melinda revealing herself as ATF.

It was revealed later on that Melinda is the villainous mastermind of a covert sale of illegal weapons, with Staff Sergeants Rafael and Thomas Grimm, as well as Corporal Patricia McClain, working under her. Grimm was later killed by McClain after demanded a larger cut, and Rafael was taken into custody and grilled by Kate Todd.

Meanwhile, Melinda went with Gibbs and DiNozzo to meet with a militia group looking to buy the weapons, but after noticing that the firing pins were missing, the enraged leader of the group shoots Gibbs. It was at that moment that Melinda was revealed as a villainess, as the leader accused her of attempting to cheat them. After a deal was made, the evil Melinda phoned McClain and told her that she had a buyer, but it was at that moment that the leader was revealed to be working undercover with Gibbs, and Melinda was arrested shortly after McClain was taken into custody. Regarding Grimm's murder, Melinda stated that McClain had killed him, but Gibbs reminded her that McClain could be hurling the same accusations toward her, right before Melinda was taken away. 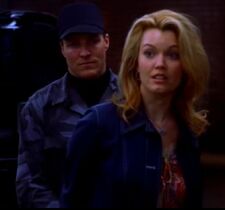 Melinda Stone's villainous reveal and arrest
Add a photo to this gallery
Retrieved from "https://femalevillains.fandom.com/wiki/Melinda_Stone_(NCIS)?oldid=182808"
Community content is available under CC-BY-SA unless otherwise noted.