Start a Wiki
watch 01:48
The Loop (TV)
Do you like this video?
Melina is a former professional wrestler and manager best known for her time in WWE, where she portrayed a villainess.

Melina started out as the evil centerpiece of the tag team known as MNM back in 2005, and in that role, Melina managed her team to three reigns as WWE Tag Team Champions. Melina's diabolical acts included kidnapping Trish Stratus and challenging her to a WWE Women's Championship match at the 2005 Survior Series, which Melina lost, and attempting to seduce Dave Batista into turning down a tag team opportunity against her boys. When that didn't work, Melina threatened to sue Batista for sexual harassment and enlisted Mark Henry to take him out. She was "fired" from SmackDown after she slapped General Manager Theodore Long at Judgment Day in 2006.

Melina was moved to Raw later that year, and on February 19, 2007, she defeated Mickie James to win her first Women's Championship. She then started targeting the Divas who posed for Playboy and would trash them and beat them down. Melina held two Women's Championships as a villainess, with her second reign ending at Vengeance:  Night of Champions when she lost to Candice Michelle. In the months that followed, Melina aligned with Beth Phoenix in her continuous crusade against Playboy. The alliance ended in May of 2008, as did Melina's first run as a villainess.

After two years as a babyface, Melina began turning heel in December 2010, beginning with a non-title loss to then-WWE Divas Champion Natalya in a singles match. When Lay-Cool (Layla and Michelle McCool) entered the ring and attacked Natalya, Melina walked to the back instead of returning to the ring to help her. Two weeks later, Melina defeated Alicia Fox and Eve Torres to become the #1 Contender for the Divas Championship. Following her victory, Melina turned villainous and delivered a slap towards Natalya, who attempted to congratulate Melina on her victory. In an unaired promo on January 3, 2011, Melina laughed evilly and stated that she slapped Natalya because she "sometimes gets emotional." In her second run as a villainess, the evil Melina failed to capture the title and later feuded with Gail Kim; accusing Gail of being a "horrible friend" for unknown reasons on numerous occasions. Melina's second tenure as a villainess ended when she was released from WWE in August 2011.

Melina competed on the independent circuit after her WWE release, defeating Lexxus in her first post-WWE match in October 2011. Melina turned heel in March 2012 and began a feud with Velvet Sky; competing in a pair of matches against Velvet at Northeast Wrestling, winning the first and losing the second. Melina's feud with Velvet continued in Puerto Rico later that year, as she defeated Velvet in two singles matches before losing a mixed tag team match to Velvet.

On June 19, 2015, Melina returned to the independent scene at Maryland Championship Wrestling's Ladies' Night event, doing so as the villainous enforcer of the main event: an MCW Women's Championship match between defending champion Amber Rodriguez and challenger Mickie James that was officiated by Lisa Marie Varon. After Varon was accidentally knocked down by Mickie, Melina entered the ring and started to make the three count in Mickie's favor, but instead, Melina established her heel persona and attacked Mickie, while reminding her of their past as rivals in WWE. Shortly afterwards, the evil Melina continued attacking Mickie and delivered her Last Call finisher, and later unleashed her Primal Scream. At that moment, Varon re-entered and attacked the villainess with her Widow's Peak move.

On August 5, 2015, Melina appeared as a villainess for Lucha Underground, when she interfered in a match between Johnny Mundo (the former Johnny Nitro/John Morrison) and Alberto El Patron. Melina attacked El Patron and helped Mundo defeat him, reuniting the pair as villains for the first time since their WWE days. Melina returned to MCW in October as the villainous manager for John Hennigan. 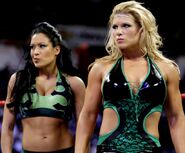 Melina delivers a slap to Natalya 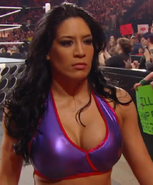 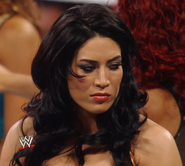 Melina smirking evilly while posing on the ring ropes 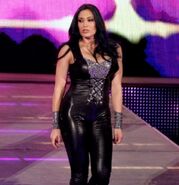 The evil Melina in her black ring gear 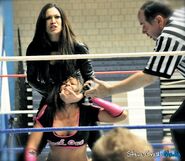 The evil Melina snarling at the crowd while torturing Velvet Sky 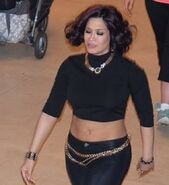 Melina's evil smirk during her entrance

Melina turning heel and attacking Mickie James
Add a photo to this gallery
Retrieved from "https://femalevillains.fandom.com/wiki/Melina_(WWE)?oldid=187680"
Community content is available under CC-BY-SA unless otherwise noted.