The Female Villains Wiki
Register
Don't have an account?
Sign In
in: 2010s, A Taste Of Her Own Medicine, Ambitious,
and 92 more

Megumi Shimizu was an attractive young girl from Sotoba who was one of the first people to be tragically killed by the Kirishiki family, namely by Chizuru Kirishiki. She was also the first person to die that wasn't in Yamiri, and was also the first person to knownly rise up as a Shiki several days after her death. She is one of the most frequently appearing characters in the Shiki series and is one of the most entertaining characters in the show. Due to her city-girl personality and style, she dreamed of one day leaving the village and living a glamorous life in a big city.

Despite her hatred for her town, the two things she cared about within it were her crush, Natsuno Yuuki, and a recently built mansion in their town. (which the Kirishiki family moved into)

Megumi was born and raised in Sotoba and hates living in there. She goes to highschool in Mizobe town and she often dreams of going to a university in the city once she graduates. After leaving Sotoba, she plans to get scouted into show business where she'd hang out at clubs every night and have many people admiring her. The only thing she cares about in the village is the large western-looking house on top of the hill that was recently built and Natsuno Yuuki, a big city transfer student and her crush.

On August 11th, Kaori and Megumi get into an argument when Kaori says that she isn't interested in the mansion or the people in it and how she finds them weird.

As Megumi storms away, she senses someone looking at her from the mansion. While showing off her model walking skills, she trips. Seishirou Kirishiki and Tatsumi open up the gates and greet her. She then goes missing the same day and a search party gets organized.

The town searches for Megumi in the mountain woods until she is found on the 12th. She can stand but wouldn't talk. The villagers thought it was nothing serious and ended up not taking her to the clinic. They took her home and called Dr. Ozaki.

Dr. Ozaki goes to Megumi's house where her parents thank him for coming all the way there. He finds that there isn't anything wrong with her physically except that she won't eat or talk. She doesn't have a fever, just some insect bites. She is found to be anemic. He says that he is going to draw some blood. Her parents are both relieved. Megumi finally speaks up as he was on his way to leave the Shimizu household and says that she's very sleepy, instantly closing her eyes and falling asleep. Megumi can't remember what happened there and only remembers being invited by Tatsumi and Seishirou Kirishiki into the mansion, where she met the whole Kirishiki family.

Megumi was a cute, relatively tall and attractive young girl, and appeared to be quite thin. She had long wavy strawberry blonde hair of length to end of her back which was parted down the middle with messy bangs on her forehead and framing messy hair by her cheeks. She always kept her hair in two high twin-tails and was never seen without it styled, except for when she fell ill and died. Megumi's large eyes were a cool shade of cherry red. She had a thin nose and plump rosy lips. When she turned Shiki her eyes took on the common black and crimson red color of her kind. She kept her skin pale and was cautious of her appearance. Through out the series, Megumi can be seen wearing a variety of stylish original clothes, shoes, make up, and hair accessories. She was seen wearing different kinds of clothes and all of them looked great on her, one day she'd wear punky or gothic revealing outfits and then the next day she'd wear a bright summer dress or a cute hoodie with bunny ears and rainbow-colored socks and wristwears. Other than her fancy clothes she is also shown to keep her nails and lips done in variety of different colors from peachy shades or blood-red to black or pink. Most of the time she wore some form of gothic jewelry or bows and is shown to get quite creative with her stunning unique outfits.

Megumi could be self-centered and often thought only about herself. She hated Sotoba and felt that she didn't belong there, made worse by the fact that the other villagers made fun of her for dressing nicely in a place like Sotoba. Though she acted polite and respectful to the villagers, she looked down at them for their lack of self-consciousness of how people outside the village would view them and would often get frustrated with their view that anything outside of Sotoba was weird and that her dreams to one day live in a big city were a waste of time and ridicilous. She also looked down on her childhood friend Kaori, whom she viewed as an annoyance even though she acted polite to her as well. On the other hand, she acted delightful and shy when she was around or talking to Natsuno, who she had a crush on, although he didn't feel the same way for her. As a human she was often shown taking walks around her town in fancy outfits while day-deaming and fantasizing about a better life. After she rose up as a Shiki, she became more malicious. Megumi seemed to easily accept attacking other villagers and enjoyed the new undead community that she was a part of. Except for her desire of leaving Sotoba getting stronger, her feelings for Natsuno also became much more intense as she began targeting people close to him. She developed a disliking for his best friend Tohru Mutou and agreed with Tatsumi to kill him because Natsuno never gave as much attention to her as he did to Tohru. She later agreed with Tatsumi to kill her childhood friend Kaori's father as a payback for betraying her and getting close to Natsuno despite knowing about Megumi's feelings for him. She was impulsive and often voiced her opinion or expressed her own thoughts before considering how they would affect other people. This was shown when she learned of Natsuno being targeted and Nao Yasumori trying to assure her that he would become one of them. She got frustrated and shouted at her with the fact that none of her family rose up, causing Nao to break down in tears. She had no sympathy for any of the villagers, due to their constant mocking toward her and their unwanted crititcism on her outfits. The only person she truly cared about was Natsuno Yuuki, probably because he was the only one who wanted to leave the village along with her.

Megumi's death differs in the anime, original novel and manga.

- In the anime, while the villagers are killing all the Shiki, Megumi attempts to escape to a big city where she could live a nice life. While Megumi is crossing the road where she once used to wait for the bus with Natsuno, she sees a flashback of him waiting for the bus and gets distracted, causing her to get caught. The villagers chase her into a rice field, but she wasn't scared because they couldn't see at night however a bunch of villagers driving tractors appear and lighten up the whole rice field, making her vulnerable. While she was running through the rice field, she gets hit by a tractor and gets stunned. The villagers soon get to her and she tells them that all she wants is to go to the big city. This fails and she gets hit by another tractor that soon crushes her arm, she screams about how much she hated Sotoba ever since she was born and how a village like it shouldn't have ever existed. Another tractor pulls up and proceeds to run over her face. Megumi is still alive and still proceeds to squirm until she got staked by Hirosawa and two other villagers in the heart and died. She was later transported to a pile with the other dead shiki where they burned in fire together with the whole village.

- In the manga, she still tries to make her escape but most roads were blocked so while making her way to the city, she runs to the highway, carrying a suitcase with her. As she was crossing the last road before she was able to escape out of the village, she gets distracted by an illusion of Natsuno and gets hit by a vehicle. Her suitcase opens and her clothes fall all around the road. As Megumi was under the vehicle, all broken, the villagers blast a flashlight and gossip about her personality while she was still alive. She soon becomes concious again and proceeds to escape still but the villagers get to her, pounding about eight stakes into her chest and heart. They pick up all of her clothes from the road and put it in the back of the vehicle together with her body. In her final thoughts, she thought she saw Laforet (a store located in Harajuku that she has always wanted to go to) even though it was just a magazine of such laying beside her with the rest of her magazines, clothes and accessories as her body was being transported to a pile with other dead shiki, where they burned together with the village.

- In the novel, she hid herself deep in the mountains and had a plan of escaping for the city but she woke up to complete chaos. The mountains were glowing, the fir trees were burning (Due to Motoko's mental breakdown where she burned the entire village). As she was escaping for the city, she saw everyone dying left and right, but she attempted to make it out undetected to the National road, which she called "Good Luck". As she crosses the national road of Sotoba, a group of villagers notice her and chase her. She runs into a rice field, looking for a safe place to hide, but finds non. An off-road bike descends into the rice field, Megumi falls and gets knocked down into a ditch near the National road. She is stuck due to the drainage being too narrow and Seiji Matsuo comes to help her out. As he grabs her, he realises she was a Shiki and holds her. Megumi cries and begs for him to leave her alone but him and a group of villages stake her, leaving her body in the bloody water.

Megumi in her human state 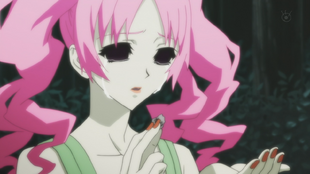 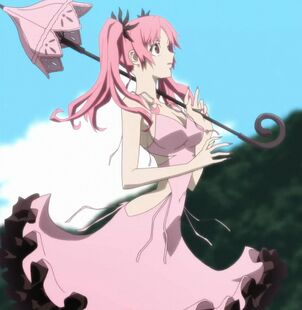 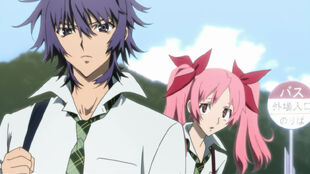 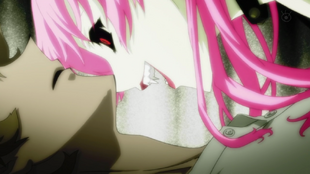 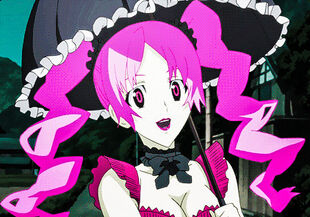 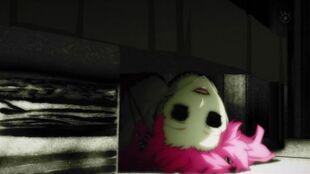 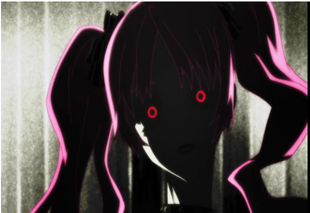 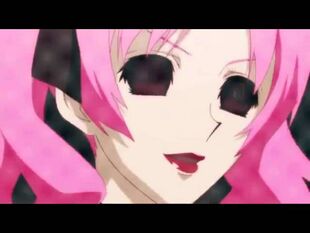 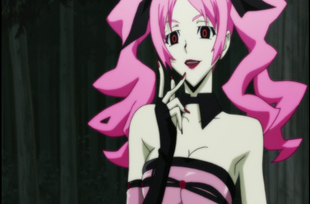 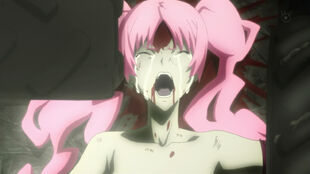 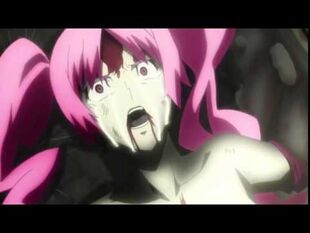