Start a Wiki
watch 01:39
The Loop (TV)
Do you like this video?
Megan Montrose (Jovanna Burke) is the main villainess from the 2019 Hallmark film, Ruby Herring Mysteries: Silent Witness, the first film of the Ruby Herring Mysteries series (airdate January 20, 2019). She is the niece of Sugar and Sam Albert, who were the owners of a baking empire.

Megan worked for Sugar, who was the majority owner, and appeared to be grateful to Sugar for her opportunity. In actuality, Megan expressed bitterness towards Sugar for her plan to sell the company, as she felt that her aunt was using her and only cared about money. Her sentiment plus the sale getting in the way of her ambition led to Megan planning to kill Sugar, beginning with lacing Sugar's water bottle with a powerful medication. Later on, Sugar and Megan went out jogging near an isolated area, and while posing for selfies taken by her niece, Sugar began to feel the effects of the drug. Megan later shoved Sugar over a cliff, and after she fell in the stream, the villainess drowned Sugar.

Megan was heard shouting for help by Ruby Herring and her sister, Charlotte, and it was afterwards that the siblings found Sugar's body. Megan claimed that Sugar accidentally fell to her death and that she found her aunt, acting as a shocked bystander to mask her murderous role. When Ruby began investigating Sugar's death, the evil Megan tracked Ruby to the same wooded area, and backed away once Ruby heard a noise from close by. Throughout the investigation, Sam was a suspect, as well as Sugar's business rival, Marion, who was actually arrested for the murder. All the while, Megan became the VP of the company after killing Sugar.

However, Ruby looked at Megan's photos of Sugar and noticed that her sunglasses reflected a pair of pink running shoes, meaning that she wasn't alone. While talking to Megan about the investigation, Ruby looked at her locker and saw the same shoes, which began the reveal that Megan was Sugar's killer. Ruby's inspection of Megan's heart monitor saw spikes at vital points, with one of them being the time that Megan found her aunt's body. In order to catch Megan, Ruby set a trap for her, stating that the shoes proved Marion's innocence, leading to the villainess taking the shoes to the kitchen and placing them into the oven to burn them, only to be caught by Ruby.

Megan denied Ruby's claim that she killed Sugar, only for the deranged murderess to wield a knife and reveal her hatred of Sugar, stating that she was ruining her livelihood as well as Sam's. Her attempt at Ruby was thwarted by Detective Jake Killian, who also revealed that she poisoned Sugar's water bottle. Killian arrested Megan, after which Megan snarled at Ruby and stated that she should have pushed her over when she had the chance, revealing that she was following Ruby. 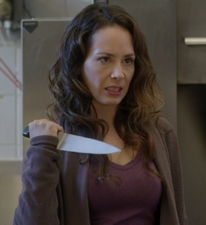 Megan wielding a knife during her reveal
Add a photo to this gallery
Retrieved from "https://femalevillains.fandom.com/wiki/Megan_Montrose_(Ruby_Herring_Mysteries:_Silent_Witness)?oldid=206677"
Community content is available under CC-BY-SA unless otherwise noted.