Start a Wiki
watch 01:48
The Loop (TV)
Do you like this video?
Medusa (Uma Thurman) is a minor antagonist in the 2010 movie Percy Jackson & the Olympians: The Lightning Thief, portrayed  by Uma Thurman.

Posing as an old Middle Eastern lady named Aunty Em, Medusa lures people into her "Emporium" and then turns them into statues by making them look at her face, usually directly at her eyes. She wears a veil to hide her face. She pretends to take a photo of her victims and lifts the veil to uncover her head, thus turning her victims to stone. Medusa turned many people and creatures into statues, including Grover's Uncle Ferdinand.

At one point, Percy Jackson, Annabeth Chase and Grover Underwood are lured into the shop by the smell of food during their Quest. Grover notices that a statue in the shop looks like his uncle. Medusa feigns kindness, by giving them food and talking to them about her shop. She also mentions that her sisters are gone. (They faded because people forgot about them.). She then tries to get them to pose for a photograph and turn them into statues.

Grover realizes that the suspicious statue is indeed his uncle. Annabeth and Grover realize who Aunty Em really is. They try to convince Percy that they should leave. Percy, however falls for Medusa's kind words and refuses. A few minutes later, Percy realizes that "Em" means "M" for Medusa.

At this point, Medusa reveals herself. It becomes too late to escape, so the trio decide to fight Medusa. After a brief struggle, Percy defeats Medusa by severing her head with Riptide, his celestial bronze sword, using a polished bronze ball as a mirror. He then sends the head to OIympus via the Hermes Express.

Later in the book, Percy gives Medusa's severed head to his mother, Sally Jackson. She uses the head to turn Gabe[1]Ugliana, Percy's abusive stepfather, and his friends, to stone. Sally goes on to sell the stone statues as a work of art. She uses this money to pay off her debts and get a better life for her son and for herself. 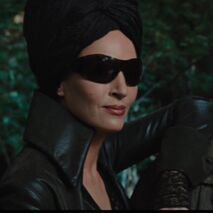 Add a photo to this gallery
Retrieved from "https://femalevillains.fandom.com/wiki/Medusa_(Percy_Jackson_%26_the_Olympians:_The_Lightning_Thief)?oldid=176534"
Community content is available under CC-BY-SA unless otherwise noted.