Start a Wiki
watch 04:10
The Loop (TV)
Do you like this video?
Melissa Gorgonopolis, aka Medusa (Victoria Sanchez), was the main villainess from "She Will, She Will Rock You," the second season finale of Big Wolf on Campus (airdate September 9, 2000).

Melissa was a transfer student who served as the object of Merton Dingle's affection, as he was admiring her during art class.

Though she is introduced as Melissa Gorgonopolis, she is revealed as Medusa in the episode's early scenes when she turns a student to stone with her gaze. Tommy Dawkins' attempt to get Melissa interested in Merton fails, but he returns to see her powers at work. After shifting into his werewolf form, Melissa is suddenly enchanted by Tommy's appearance, and immediately falls for him--while revealing her real name as Medusa. Tommy rejected Medusa's advances, and did so again later in the episode, stating that he wasn't over former girlfriend Lori Baxter (who he witnessed sharing an inadvertent kiss with Merton).

Tommy and Merton arrived to save Lori, leading to a battle between the trio and the villainous femme fatale. After subduing the group, Medusa again failed in attempt to seduce Tommy and assumed her true gorgon form. Scorned for the last time, she was about to turn him to stone, only for Merton to sacrifice himself to save his best friend. Before Medusa could strike again, Lori grabbed a discarded car mirror from the ground. Tommy held Medusa in place from behind, forcing her to look forward as Lori held up the mirror.  Medusa in a panic reflexively went into her gorgon form which triggered her gaze. The villainess could not avoid her own reflection and became a stone statue herself. 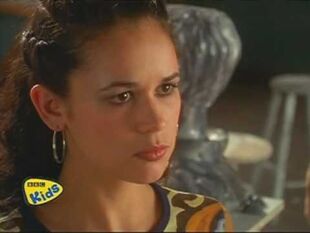 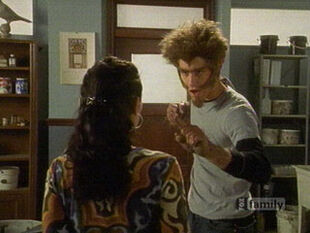 Medusa goes into seduction mode to snare her prey 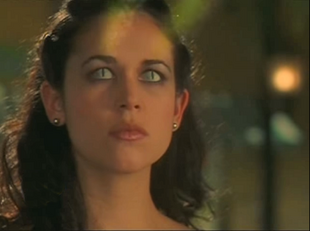 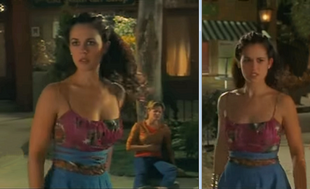 Ready to kill after being rejected

Medusa's final attack halted when she is grabbed

Held and forced to look at her own reflection

Stone gaze at herself in mirror

Medusa is turned to stone, killing her 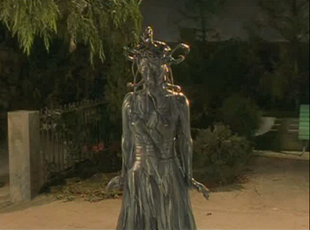 Now a statue in the park 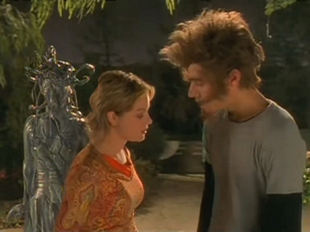 In a final insult, the protagonist have a long conversation while defeated Medusa is right behind them
Add a photo to this gallery

Retrieved from "https://femalevillains.fandom.com/wiki/Medusa_(Big_Wolf_on_Campus)?oldid=201924"
Community content is available under CC-BY-SA unless otherwise noted.