Mary Ann "Medusa" Rogers is the main antagonist from the movie 3 Ninjas: High Noon at Mega Mountain. She is played by Loni Anderson.

Role in the Movie

After she takes the control room at the Mega Mountain Park, she demands $10 million from the owner of the park and takes the riders of one of the rollercoasters hostage after stopping the ride in the middle of a loop. After she does this, Dave Dragon (Hulk Hogan) tries to stop her by infiltrating the control room. He successfully defeats Medusa's henchmen but is then brought down by Medusa after she uses her whip on him. Her henchmen tie him up after that. Knowing that Dragon won't be a problem Medusa goes with her henchmen to the middle of the park to pick up the $10 million which the owner drops from a helicopter. After recovering 2 bags of money, Amanda (one of the protagonists) uses her toy helicopter to destroy the bag of money. After seeing that it was Amanda who destroyed her last bag of money, Medusa kidnaps her and tells her that she will keep her as a slave for 50 years for the money

that she cost her. But after surprises her by handcuffing her to a pipe, and setting of a bomb that she will leave behind. By this point Medusa had squeezed herself into a wetsuit. The 3 main protagonists attempt to save Amanda from the evil clutches of Medusa. They successfully defeat most of Medusa's ninja henchmen, and finally get to Medusa. Medusa then shoots out all the lights, leaving the 3 protagonists to her henchmen, and then fleeing. They defeat the henchmen even with their inability to see but cannot find a way to disarm the bomb that Medusa left behind. They attach the bomb to an oxygen tank on rollers and try to break the valve to send it speeding forward out of danger but do not posses the strength required to break it. Luckily Dragon comes and he manages to break the valve and send the ticking bomb torpedoing towards Medusa's getaway ship.

As the torpedoing bomb is heading towards Medusa's ship it ticks away fast enough to blow up when it reaches the ship. Before seeing the torpedoing bomb Medusa laughs in joy and thinks she has gotten away with her money, but when she finally sees the bomb she and her henchmen jump off the ship into the water. The explosion catches the attention of the authorities, and they quickly arrest Medusa on a nearby beach,who is clutching her bag of money. After she sees the police she pouts in defeat, and is sent to jail. 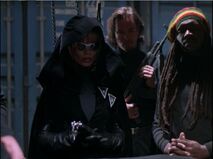 Medusa convenes a meeting aboard her ship 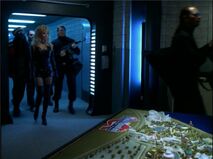 Medusa and her thugs begin their attack on Mega Mountain! 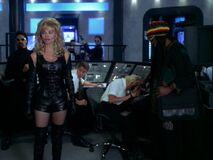 Medusa in charge of the theme park's control room! 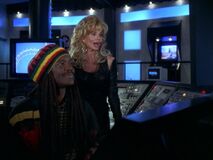 The villainess and her henchman take over the park's computer system! 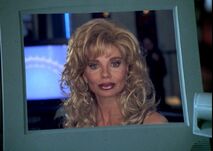 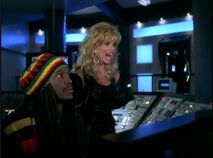 Medusa screams in frustration as she realizes something has gone wrong with her plan! 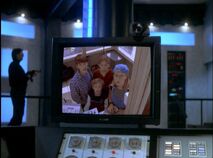 The child heroes appear on Medusa's screen. They tell her, "We're not afraid of you!" 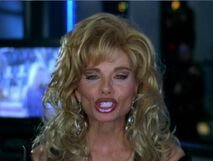 "Oh, but you WILL be!" the villainess hisses back at the children. 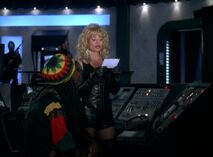 Medusa examines a picture of the young ninjas 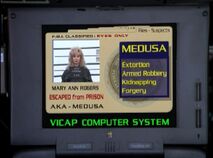 The FBI file on Medusa shows she has recently escaped from prison! 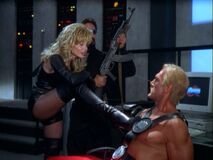 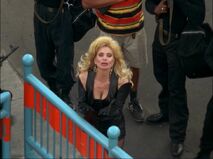 The wicked villainess prepares to collect her ransom dropped from a helicopter! 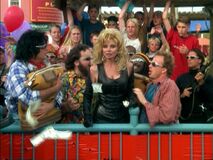 Something goes wrong as most of the money falls all over the park! 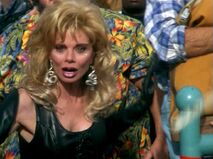 Medusa is shocked to see who is repsonsible for stealing "her" money! 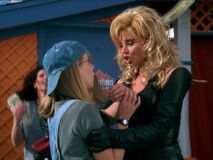 "You're coming with me!" the villainess says as she grabs Amanda 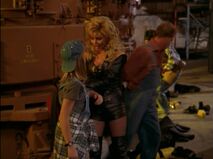 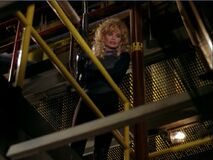 Medusa looks on as children battle her warriors 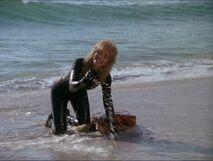 Thinking she has escaped justice, Medusa is happy! 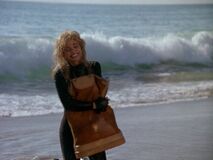 The villainess hugs her bag of money! 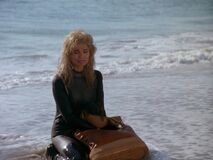 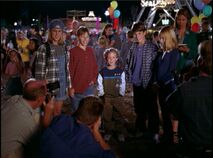 After Medusa is defeated, captured, and sent to jail, the children are celebrated as heroes!

Add a photo to this gallery
Retrieved from "https://femalevillains.fandom.com/wiki/Medusa_(3_Ninjas)?oldid=193100"
Community content is available under CC-BY-SA unless otherwise noted.