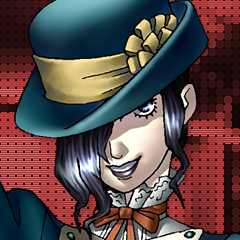 Her role in the game is very brief, making a surprise - yet unintentional - meeting with the protagonists outside of their original headquarters. A summoner of the Phantom Society, she calls forth the demons Vetala, Purple Mirror, Mizuchi and Kasos to aid her in battle. After being defeated, she reveals that the combat was simply "Plan B" and that she left another deadly surprise for the heroes. Laughing as she dies, the protagonists realize that Mayone has rigged the HQ with explosives. Fortunately, however, everyone manages to survive the blast.

In-game appearance.
Add a photo to this gallery
Retrieved from "https://femalevillains.fandom.com/wiki/Mayone_(Shin_Megami_Tensei:_Devil_Summoner_-_Soul_Hackers)?oldid=54267"
Community content is available under CC-BY-SA unless otherwise noted.