Maya Tachibana (Youko Matsuoka) is the hidden villainess from "The Mysterious Woman With Amnesia Case", episode 1.24 of Case Closed (airdate July 15, 1996). Maya first encountered Conan Edogawa, detective Kogoro Mouri, and his daughter Ran Mouri at a horse racing track when she fainted on the stairs. When she admitted to the hospital, she revealed that she had no memory of anything aside from her first name.

After deducing that Maya had been at a hotel before losing her memory, due to having a ripped page from the Bible in her pocket, Conan and company escorted Maya to the numerous hotels in town to see where she had been before losing her memory. They eventually found that Maya had been at the Beika Grand Hotel, where Maya and Kogoro were nearly struck by a car, with the driver being a mysterious man Conan saw at the race track watching Kogoro. This led Kogoro to believe that the man was attempting to kill Maya, with a previous attempt resulting in Maya's amnesia.

After coming across a bus accident, Conan correctly inferred that Maya had been on the bus and struck her head in the crash, resulting in her amnesia. After taking another bus ride, Maya recognized a water tower as being the location where she was going. There, the mysterious man made another apparent attempt on her life, with Conan seeing that Maya recognized the assailant and that there was a retractable wire in Maya's pendant. This all led Conan to realize that the man who had been following them had been trying to kill Kogoro, not Maya. This also led to the revelation that the man was Hitoshi Yuda, an escaped murderer who vowed revenge against Kogoro for putting him away. Maya's villainous reveal came when she met with Hitoshi in an abandoned building, revealing that she was a hired hitwoman working with Hitoshi to kill Kogoro.

When Hitoshi chastised Maya for costing them a chance to kill Kogoro, Maya knocked Hitoshi out and promised him that there would be another chance to do so. Maya then approached Kogoro, acting as though she was still amnesiac, and claimed that Hitoshi had run into one of the abandoned buildings. Once there, however, the evil Maya pulled out her wire and began to strangle Kogoro in a noose. Conan spotted Maya and Kogoro from outside the building, kicking a baseball into the building, knocking Maya down and saving Kogoro. As the police approached to arrest Maya and Hitoshi, Maya revealed that her memory had returned after Hitoshi's last attempt on Kogoro's life and praised Conan for uncovering her villainous secret. 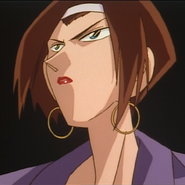 Maya's scowl, the start of her villainous reveal

Maya as she prepared to attack Kogoro

Maya as she strangled Kogoro
Add a photo to this gallery
Retrieved from "https://femalevillains.fandom.com/wiki/Maya_Tachibana_(Case_Closed)?oldid=133072"
Community content is available under CC-BY-SA unless otherwise noted.