Mava is a villainess from Zoot Comics #12. She appears in the Rulah, Jungle Goddess story Bloodstained Fangs.

She wants to take rule in Africa, and works alongside a bomb expert called Konrad. She has bombs fall on cities, which is also a signal for her people to cause carnage and kill all the white people. She carries out this mission from the jungle, and of course the heroine Rulah turns up to put an end to her plans.

While bombs are flying and carnage is occurring, Mava us relaxing in a bath, when Rulah shows up to attack her. Rulah is apprehended by Mava and her men, but Konrad has been watching and is impressed by Rulah. he decides to betray Mava. He draws a gun on Mava but she manages to attack him with a hidden dagger. She decides to have him killed.

Mava seems to enjoy slower, torturous methods of killing as opposed to a quick death. First on the list is Konrad, he is taken outside and buried, leaving only his head exposed. Konrad begs Mava for mercy, he even begs to be shot dead, but Mava wants him to suffer as he is eaten alive by flesh eating ants. She has a woman pour honey on Konrad and watches as the ants appear and eat him alive.

Next is Rulah's method of death, she has her tied up outside in the hot sun, but cruelly organises food and water to be brought to her each day, but placed slightly out of her reach, until she eventually starves or dies of thirst.

Rulah manages to escape from her death trap when rats appear and bite through her ropes. Rulah goes after Mava, she chases after her on foot, as Mava flees from Rulah she trips on the dead Konrad's bare skull and lands on top of the flesh eating ants nearby, she is eaten alive. 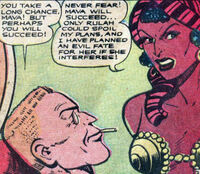 Mava enjoys Konrad's predicament as he begs her for mercy 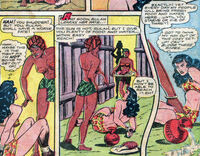 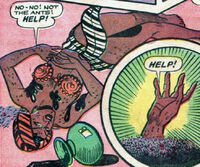 The evil Mava is eaten alive by her own flesh eating ants
Add a photo to this gallery
Retrieved from "https://femalevillains.fandom.com/wiki/Mava_(Rulah,_Jungle_Goddess)?oldid=160648"
Community content is available under CC-BY-SA unless otherwise noted.