The Female Villains Wiki
Register
Don't have an account?
Sign In
in: 1970s, Attempted Murder, Bare-Handed,
and 31 more

Maude Anderson's henchwomen are a large gang of female criminals recruited by an elderly woman to carry out major crimes for gain.

Policewomen Film (USA 1974) A crime/martial arts action movie with the lead a heroine and mainly female villains (there are 2 male villains).

Though most of the henchwomen are extras with no dialogue and uncredited, a number of them are given more important roles - and the first 4 below have speaking parts -

Henchwoman in car chase - Angela Carnon (not credited in the film, but in some other sources)

Appearance - Young women, mainly white Caucasian, but including various other ethnicities, dressed in a variety of 1970s street clothes (including hot pants) and in bikinis. In the final scenes henchwomen wear military uniforms.

Characters/Backgrounds - The henchwomen who have highlighted roles come across as unpleasant, trash talking, ruthless types.  Several times the henchwomen are called "hookers" or "whores" and Caroline Field, a leading henchwoman, is referred to as "a known call girl with (gangster) connections" by Lacy Bond.

Weapons - The only notable use of weapons by the women are the various things  - a  chain, fire extinguisher, club,  a boat paddle  - Maude's girls attack Lacy and her partner with in a fight on a boat. The henchwomen in this sequence have also used their vessel as a weapon for attempted murder.

Story - Maude Anderson (Elizabeth Stuart), seeking to recruit more criminal girls for her gang, organizes a mass escape from a woman's prison. However, the break out is largely foiled by karate expert policewoman Lacy Bond (Sondra Currie), on duty in the jail, who uses her fighting skills against the would be escapers. Only 2 of the women will actually get away from Lacy, one in reality being an undercover Treasury agent called Pam Harris (Jeannie Bell).

In the light of her impressive performance at the prison, the police authorities call in Lacy to give her the lead role in breaking up a  large girl gang who have been plaguing the area with a series of major crimes, something Ms Bond refers to as a "sort of female mafia."

Lacy, her male partner, and the Treasury agent Pam, are seen taking on the gang, disrupting their criminal activities and capturing or killing (though really not deliberately) henchwomen - and finally catching Maude Anderson.

- Lacy dealing with female prisoners, Maude's intended reinforcements for her gang,  kicking and chopping them down. Janette is the only  actual criminal who will manage to get away and join Maude, abseiling to freedom with undercover agent Pam down the walls of a prison building. - Lacy pursuing a henchwoman driver in a car chase, the girl is carrying drugs in her vehicle. - Treasury infiltrator Pam fighting the needling racist henchwoman Kim before a mob of Maude's exited, baying gang girls. -  a gang of Maude's bikini clad gold smuggling henchwomen aboard a large power boat - including Caroline and Laura - trying to ram Lacy and her partner's smaller vessel to kill them. -  the boat henchwomen trying to beat Lacy's male partner to death aboard the criminal's vessel; Lacy breaking in on them and using her martial arts skills to battle 4 of the weapon wielding bad girls. - Pam stopping fleeing henchwoman Janette, who is set on exposing the policewoman and Treasury agent  as infiltrators - Pam brings Janette down and fights the villainess near a cliff edge. - Maud and her gang moving a consignment of smuggled gold while masquerading as Army personnel in military vehicles - but Lacy and Pam foiling the caper.

- the unnamed henchwoman driving the car Lacy goes after dies when the bad girl's vehicle goes off the road, hurtles down a slope, and bursts into flames. -  Lacy, with her karate expertise, beats up/KOs and captures the weapon wielding bad girls aboard the boat - including Laura and Caroline. Returning to the mainland the police are waiting and take the handcuffed henchwomen to prison. - in her fight with Pam, henchwoman Janette gets sent over the cliff. She hangs on to a clump of bushes, Pam tries to rescue her, but she falls to her death. - the henchwomen in the truck convoy are disposed of by Lacy with karate chops. One henchwoman in an accompanying car dies when Lacy uses a truck to force her off the road, her car is crushed as it rolls over down a steep bank. Pam holds the henchwomen at gunpoint, but Kim seizes a chance to escape. Lacy pursues, catches her up, and in a karate fight soundly beats her. The police arrive and arrest Maude and the henchwomen, bundling them into cars. 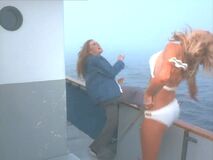 Henchwoman Janette (Laurie Rose) about to fall down a cliff 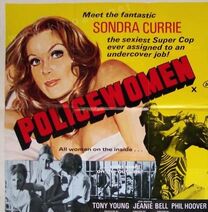 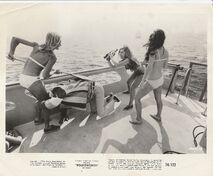