Start a Wiki
watch 01:48
The Loop (TV)
Do you like this video?
Matilde (Helga Line) is a minor villainess in the 1971 swashbuckler film "Long Live Robin Hood".  It is also known as "The Scalawag Bunch", and "Archer of Fire".

Matilde is the ex-lover of Sir Robert (Luis Davila).  Matilde is jealous over Robert's infatuation with Maid Marion (Silvia Dionisio), who he plans to marry.  This plan is not solely because of her beauty but also since a marriage between a Norman and Saxon would open many doors for Robert to begin taking over England.  Sir Henry of Nottingham, who is the alter ego of Robin Hood (Giuliano Gemma) has other plans for Maid Marion.

Matilde is shot in the back with an arrow by a guard when she tries to stab Sir Robert with a dagger. 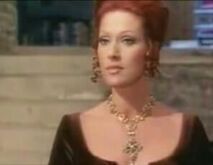 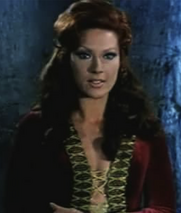 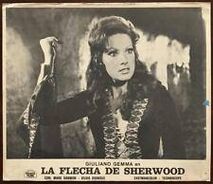 Add a photo to this gallery
Retrieved from "https://femalevillains.fandom.com/wiki/Matilde_(Long_Live_Robin_Hood)?oldid=146264"
Community content is available under CC-BY-SA unless otherwise noted.