The Female Villains Wiki
Register
Don't have an account?
Sign In
Advertisement
in: 2010s, Back from the Dead, Brunette,
and 7 more

Mary Wells, aka The Weeping Lady (Heather Lind) was the main villainess from "The Weeping Lady," episode 2.05 of Sleepy Hollow (airdate October 20, 2014). She was Ichabod Crane's former fiancee, but she was insanely jealous of Katrina--to the point where she believed that she was seducing Ichabod away from her. Mary later confronted Katrina with her accusations, which ended with Mary accidentally falling off a cliff to her death.

For over two centuries, Mary haunted the exact location where she died, until she was summoned by Henry Parrish. In her ghostly "Weeping Lady" form, Mary killed Caroline, who made an advance at Ichabod, and tried to kill Abbie as well. She again tried to go after Katrina, but she managed to escape. In the episode's climax, Ichabod encountered Mary once again and attempted to get through to her, but to no avail. Mary was shot by Ichabod via a crossbow, and in her last gasp, the villainess attempted to go after Katrina and Abbie. Her curse was later lifted and she returned to human form. Before dying, Mary pointed towards Katrina as a response to Ichabod's query regarding her remaining at Sleepy Hollow, which led to Katrina confessing her indirect cause of Mary's first death. 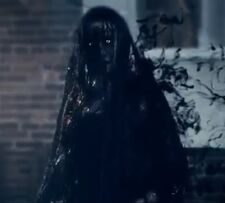 Mary Wells as The Weeping Lady 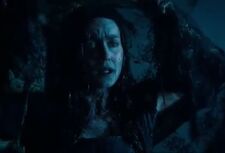 The demonic Mary removing her veil
Community content is available under CC-BY-SA unless otherwise noted.