The film begins in the year of 1957 with a seventeen-year-old girl named Mary Lou Maloney. While not yet a serial killer, she has a willing penchant for being cruel and bad. This is exemplified in the opening scene, where she, inside of a confessional, tells a priest that she disobeys her parents, uses the most sinful of curses, and is highly promiscuous. Having received the exact stunned reaction from the priest that she had been hoping for, Mary Lou adds with a smile "...and I loved every minute of it." To add insult to injury, she also writes "For a good time call Mary Lou" on the side of the booth.

At the Hamilton High School prom, Mary Lou brings Billy "William" Nordham as her date. He is so enamoured with her that he even presents a ring to her that has her initials inscribed on it. Not but a few moments after receiving this gift, Mary Lou sends Billy on an errand, and then runs off to make out with another boy named Buddy Cooper. Hurt by this, Billy finds a stink bomb and then waits until Mary Lou's prom queen coronation to toss it at her. To his horror, however, the bomb manages to catch her dress on fire and she burns to death.

Jumping ahead to the year 1987, a female hero and student of Hamilton, Vicki Carpenter, happens to find a trunk containing some of Mary Lou's old possessions, and in doing so, releases her spirit from the underworld. When Vicki's pregnant friend Jess "Jessica" Browning attempts to refashion the discovered clothes, Mary Lou kills her via strangulation in cold blood without showing any remorse.

From here, much of the middle section of film involves Mary Lou playing mind games with Vicki. The heroine begins to see strange things in the cafeteria food, hallucinates that the rocking horse in her bedroom has come to life through demonic personification, and ultimately gets sucked into the blackboard of one of her classrooms. From this point, Mary Lou obtains full control of Vicki's body.

Mary Lou's first item on her agenda is to kill Buddy, who has since become a priest himself, by stabbing him with a crucifix. She then toys sexually with another friend of Vicki's, Monica, and then fatally crushes her while she hides inside of a locker. Her games of seduction extend to Vicki's boyfriend, Craig, and the girl's own father, Walter Carpenter. When Mrs. Carpenter catches "Vicky" making out with him, Mary Lou blasts her through the front door, killing her instantly. The villainess eventually makes her way back to the high school, where another prom is taking place.

Mean-girl named Kelly Hennenlotter bribes a nerdy student named Joshua with sexual favors in exchange for him altering the vote tally so that she will be queen instead of Vicki. Discovering this, Mary Lou mercilessly electrocutes him through his computer.

Billy, now the principal of the school, after realizing that Mary Lou has returned from the dead, knows that he has to stop her once and for all. He manages to shoot her during the coronation, but this only causes her to transform into her original form. In her rage, Mary Lou begins killing people around her, including Kelly. Mary Lou moves to take Craig back to the underworld with her, but before she succeeds, Billy manages to place the crown on her head and kisses her. Realizing that she has finally attained prom queen status, she then vanishes, though only momentarily. For when Vicki, Craig and Billy return to the outside, the former two realize that Mary Lou wasn't defeated, but has instead taken possession of Billy.

Vicki's hallucinations are taking quite a toll on her...

...though Mary Lou seems to find them quite funny.

Monica notices a disturbing change in her friend...

...but there's nowhere to hide.

Movie poster for the Spanish version. 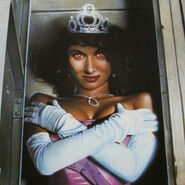 The film starts off in hell, where Mary Lou and a handful of exhausted other girls are forced to perform a chorus line. The female villain manages to escape this punishment by using a nail file on her leg shackle. She then returns to her old Hamilton High in the mortal plane.

Mary Lou's first victim to celebrate her return is a janitor named Jack. who she mercilessly electrocutes him with an old jukebox until his pacemaker explodes. Shortly after, she begins taking a shine to a male student named Alexander Grey who happens to be unhappy with his life, as well as having doubts about his future at the time. Using her powers, she aids him in his athletic ability, detours bullies from assaulting him, and cheats to ensure his failed grades become positive ones. The latter method involves her second vctim - a teacher named Mr. Walker - who Mary kills in cold blood with an ice cream mixer.

Mary finally meets Alex face to face and introduces herself. Moments later, he then finds the corpse of his teacher, which has been gruesomely fashioned to create a large ice cream sundae in his torso. Immediately bewitched by the undead woman, he gets rid of the body, though remains very unsettled about it. Mary Lou simply retorts with "Who's going to miss another science teacher?"

Mary Lou becomes Alexander's new girlfriend, though one he keeps on the side from his other current love interest, Sarah Monroe. He tries to establish some "ground rules" that she has to stop her killing from here on out, but quickly backs down due to her seductive and semi-threatening nature. When she moves on to kill Miss Richards (a guidance counselor whom Alexander clashed with) by locking her into a salon chair and torturing her to death by drenching her in battery acid. As well as angry bully named Andrew Douglas by throwing a football-shaped drill at his abdomen, Alexander decides that he wants nothing more to do with her. Mary Lou doesn't give up that easily, however; a fact that she is more than willing to inform him of.

Mary Lou disguises herself as Sarah and attempts to seduce Alex's good friend, Shane. She tells him that he has a big heart, and then opts to show it to him by driving her hand through his chest and into the sofa. By this point, Alex transitions from wanting to ignore her to destroying her. He manages to lure her back out at the high school and commits to giving himself over to her on the condition that she finally leaves everyone else alone. She accepts, and the two disappear through a portal that leads to a nightmarish version of the school.

Sarah manages to follow, and eventually finds Alexander restrained to a chair, with Mary Lou about to place a crown - which happens to have a lethal, whirring drill emerging out the bottom - onto his head. The two females have a brief scuffle, but Sarah comes out on top when she stuffs a bomb into her rival's cleavage, which explodes seconds later.

Alexander and Sarah return to the mortal plane, believing Mary Lou to finally be dead and that their long nightmare has come to an end. They embrace with emotion and then stop off at a diner so that they can call their parents. Alexander runs up to the payphone, but is surprised to find that it accepts dimes, rather than quarters. Before the two can piece it together, Mary Lou appears in the back seat of the car behind Sarah and kills her by skewering her hand and arm straight through her body. The female villain then laughs evilly as Alexander runs around in a panic with the realization that his ordeal is far from over.

Mary Lou extends a greeting to Jack, who she hasn't seen in 30 years...

Of course, it isn't long before she begins to acquaint herself with new faces as well.

As far as she's concerned, she's the evil-wish granting genie that Alex never knew he wanted.

But when the murders begin to extend to those close to him, he wants out.

As if Mary Lou would ever permit such a thing.

Sarah believes that she has delivered the ultimate punchline to her nemesis...

...but in the end, Mary Lou gives her a permanent reminder of just who the master prankster really is.

Escaping hell with her nail file.

She decides Alex needs some motivation while burying a body.

The Doctor is in

That's not a manicure, that's a massacre

Just sit back and enjoy...

Murder is on the schedule

Sarah gets the upperhand and locks her into a chair

She also leaves her a nasty present.

But it looks like she gets the last laugh after all.

Add a photo to this gallery
Retrieved from "https://femalevillains.fandom.com/wiki/Mary_Lou_Maloney_(Prom_Night_series)?oldid=193984"
Community content is available under CC-BY-SA unless otherwise noted.