Mary Lennox (Joan Huntington) is the mastermind behind a counterfeit ring in the 1967 episode "Night of the Circus of Death" in the TV series "The Wild Wild West".

Mary was the wife of Abner Lennox (Philip Bruns), the Director of the Denver Mint. Secret Service agents James West (Robert Conrad) and Artemus Gordon (Ross Martin) visited Director Lennox at his office in Denver to get his expert advice on some masterfully forged bills that were appearing in circulation. We first see Mary when she comes into the office and gives her husband his daily dose of medication.

After West and Gordon leave, they decide to visit Doc Keyno (Arthur Malet) in prison, to get more information on the counterfeit bills. Keyno tells them that the bills can only be made by Harry Holmes (Morgan Farley). They determine that the bills are being passed through the a Bronzini (John Armond) who works in the traveling circus. The only problem is that he has just recently been killed, so they do some snooping around at the circus. There he meets a beautiful lion tamer named Erika (Arlene Martel).

When West and Gordon go back to the Mint to question whether the paper and ink for the counterfeits could be coming from inside the Mint they get into trouble. With her face covered, a concealed Mary is seen outside the Mint in a carriage. West is then attacked and locked inside a warehouse. Meanwhile, Artemus has disguised himself as a janitor inside the Mint, and snoops around inside of Director Lennox's office.

West finds a hidden warehouse where the engraving of the counterfeit bills are being printed. It is being manned by Harry Holmes, who had faked his death eight years previous. To top it off, it is discovered that Mary is none other than the daughter of Harry Holmes in addition to her being the wife of Director Lennox, the head of the Mint. Therefore, she has the perfect cover to obtain supplies, and also carry out the printing of the fake bills. Mary shows up along with her henchman, Bert Farnsworth (Paul Comi). They lead West deeper inside the printing operation. Here West learns that Mary is accomplishing this whole operation without the knowledge of her husband, calling him a bumbling fool. She is keeping him in check by keeping him drugged.

They are about to get rid of West, when he thwarts their plan by knocking out Farnsworth and the other workers. Artemus shows up and West escorts Mary upstairs, which happens to adjoin the Lennox's townhouse. Abner Lennox shows up with West pointing his gun at him, which is confusing to the clueless director. Mary and the gang was apprehended and taken to prison. 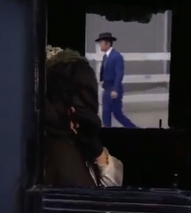 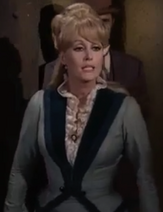 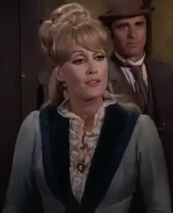 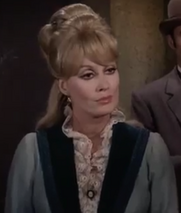 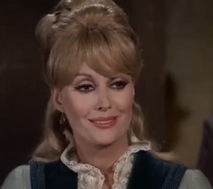 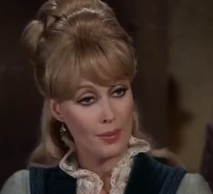 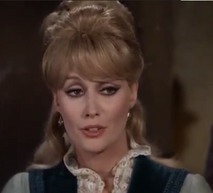 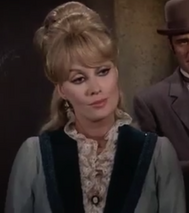 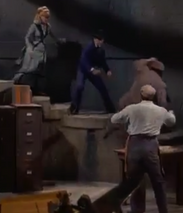 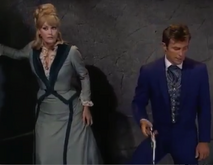 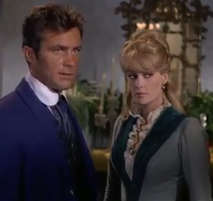 Merri Ashley as Artemus Gordon's date
Add a photo to this gallery
Retrieved from "https://femalevillains.fandom.com/wiki/Mary_Lennox_(The_Wild_Wild_West)?oldid=218758"
Community content is available under CC-BY-SA unless otherwise noted.