Mary Jo Clarkson is the estranged wife of Alex Hass and the mother of their nine-year old son, Jacob Hass. Her backstory only revealed that at some point during her marriage to Alex, she had converted to Islam. She and Steve Hass (Alex's cousin) began following a radical Islamic imam who was based in the Bronx, with both of them becoming radicalized as a result--leading to Steve changing his name to Khalid Hassan. Khalid was taken into custody in the episode's events, as an intercepted email revealed that a suicide bombing would take place. As for Mary Jo, her own radical Islamic beliefs led to the couple divorcing, with Alex gaining full custody of Jacob afterwards.

However, Mary Jo turned heel and planned her own suicide bombing, creating a bomb with a remote detonator and planning to have Jacob and Alex with her. The maniacal villainess was shown driving Jacob to a nearby park, with Mary Jo informing her son that they were all going to "a beautiful place" before putting on her niqab and clutching the remote. Detective Danny Reagan appeared with Alex at the site where Mary Jo and Jacob were parked, telling Alex to keep his distance before approaching the villainess and posing as a friend of Alex.

Once Jacob saw Alex, Danny shouted at Alex to step back from the scene; all the while, the evil Mary Jo shouted at Alex that they were "married for eternity" and made threats to blow up their son as part of her psychotic rant. Just as Mary Jo was about to detonate the bomb, Danny managed to talk her down long enough for his partner, Ava Hotchkiss, to retrieve the remote, allowing Danny to subdue and arrest the deranged madwoman. 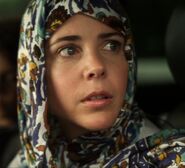 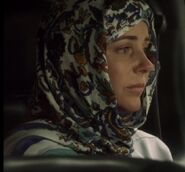 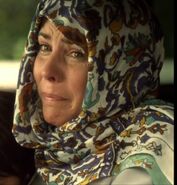 Add a photo to this gallery
Retrieved from "https://femalevillains.fandom.com/wiki/Mary_Jo_Clarkson_(Blue_Bloods)?oldid=156701"
Community content is available under CC-BY-SA unless otherwise noted.