Start a Wiki
watch 01:51
The Loop (TV)
Do you like this video?
Mary Hill is a villainess from Vampire Vengeance, a story from the March 1953 issue of Journey Into Fear.

Mary Hill is the wife of Peter Milford, and they were both students in a class on abnormal psychology at Eastern University. The professor was giving a lecture on thrill killers, and it was after the class that the couple decided to test out their theory on the criminal mind by killing a random stranger. Though Mary voiced her fears to Peter, stating that their professor said that thrill killers always get caught, she did express sadistic joy over her first experience in committing murder; a joy shared by Peter.

The couple went to the waterfront, where Peter unleashed his sword and killed an unknown man. Mary felt excited for Peter after the act, with Peter stating that he felt strange and thrilling before looking at his victim. However, the couple was shocked to see that they had killed a vampire, as the man had a pair of fangs. Mary couldn't believe what she had seen, stating that vampires don't exist. But it was at that moment that a group of vampires appeared to avenge the death of one of their own, prompting Peter and Mary to run for their lives. During the chase, Peter committed an act of cowardly self-preservation and tripped Mary, leaving her to the vampires while he made his escape.

Peter made it to his room under the belief that the vampires had killed Mary, while thinking about his own actions and fearing that the vampires would still come after him. His fear would come true when a clawed hand opened the door, and was shocked by the presence of Mary, who he believed had perished. In actuality, Mary turned heel and became a vampiress, with the group of vengeful vampires turning her after Peter escaped. As the story ends, the evil Mary flashed her new vampire fangs and detailed her plan to turn Peter into one, with the final frame indicating that Mary had inserted her fangs into her husband's throat. 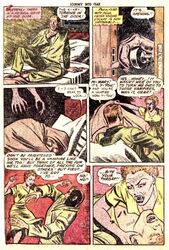 Mary returning as an evil vampiress
Add a photo to this gallery
Retrieved from "https://femalevillains.fandom.com/wiki/Mary_Hill_(Vampire_Vengeance)?oldid=98363"
Community content is available under CC-BY-SA unless otherwise noted.