Mary (played by Brooke Theiss-Genesse) is a henchwoman / antagonist in the direct-to-video / made for cable action thriller The Alternate (2000), released in the United States as Agent of Death.

Mary is a corrupt CIA operative under the command of the main villain known only as The Leader (Bryan Genesse). Together the two crooked agents orchestrate a plot to kidnap the President of the United States while he is giving a public speech at a hotel.

The Leader and his henchwoman mislead two fellow agents and an unnamed 'replacement' (Eric Roberts) that the kidnapping is fake. But once the truth is revealed, the Replacement is the only person who can save the day.

Mary is first seen - with the Leader, Replacement and two other operatives - performing a training exercise at the hotel where the President is due to make a speech later that day. The mock scenario pits the Leader's team (playing the roles of assassins) against the Secret Service protection team.

During the exercise Mary pulls off an acrobatic 'kill' by surprising two agents from above and blasting them with an automatic rifle (loaded with blanks). Ultimately the result is a victory for their team thanks to clever planning and superior skills.

After the training is over the Leader invites the Replacement to take part is an actual kidnapping, stating that the President has sanctioned this to flush out a terrorist known as Ahmed.

The Replacement is initially reluctant to join the scheme, but the Leader convinces him by offering a large sum of money. Also Mary makes her intentions clear by pointing a gun at the Replacement.

After making plans at a secret location, the team (consisting of the Leader, Replacement, Mary and two unnamed operatives) don disguises and apply fake fingerprints. Mary - wearing a brunette wig and red-tinted glasses.- provides her accomplices with nerve toxin blowdarts disguised as harmless toothpicks and straws. Thanks to their preparations the kidnap team passes the hotel security team and take their seats in the dining area where the President is about to speak.

During the speech the kidnap team use their darts to knock out the Secret Service agents, grab their weapons and take the President hostage. While the Replacement secures the surveillance room, Mary and the others escort the President, First Lady and Chief of Staff to an upstairs room.

The Chief reveals she planned the kidnapping with the CIA agents as a political stunt to boost the President's faltering public approval rating. Mary plays with a remote control, hoping to show the President a television broadcast. Due to faulty equipment she inadvertently activates a security camera allowing the Replacement to see the unfolding events. Shortly after the President expresses his displeasure the Leader orders Mary to execute the two other agents in the head and eliminates the corrupt Chief of Staff.

Realising the situation has turned deadly, the Replacement sabotages a coffee maker in the surveillance room, using spilled water and electric cable to set what he hopes is a deadly trap. The President races to the hotel room where he confronts Mary and the Leader.

This leads to a prolonged shootout where Mary takes cover behind a plant and opens fire. The unlikely hero escorts the President to safety, locking a door behind them. It doesn't take long for the crooked agents to shoot their way in. Before they do, the Replacement jumps from a balcony - saving himself by grabbing a flag - but leaves the President at the mercy of the armed kidnappers.

While the Leader holds the President hostage Mary heads to the surveillance room. There she flips a switch and activates the electric trap. Mary convulses and collapses, lying still on the floor and apparently dead.

After an encounter with the Leader, the Replacement returns to the surveillance room to monitor the cameras. While he is focused on events elsewhere Mary rises behind him holding a metal pole.

The Replacement has a prolonged fight with Mary. During the battle she loses grip on the pole several times but is always able to retrieve it. The fight is lengthy and Mary strikes the Replacement repeatedly with the metal rod, showing off her superior combat skills.Mary manages to land several kicks on her opponent and grab him in a chokehold. After a minute and half of exchanging blows the henchwoman prevails and knocks the Replacement to the floor.

Mary savours the moment by pressing her rod into the Replacement's neck. She discards her weapon, presses her foot on his chest, and removes a tube of lipstick. Mary bites off the gloss end to reveal she is in fact holding a disguised blade (presumably another hidden weapon designed to bypass security).

The Leader arrives and berates Mary for 'playing with' her victim instead of killing him. His appearance proves enough of a distraction for the Replacement to turn the tables on his tormentor and grab Mary as a human shield. The Leader realises the former ally's plan too late and Mary falls in a hail of bullets. 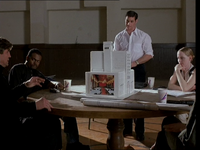 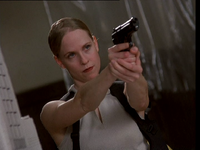 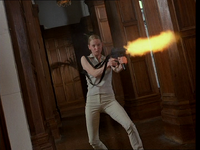 Mary during the training exercise 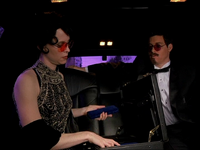 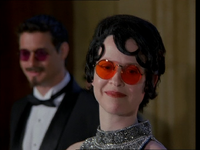 Mary and the Leader in disguise 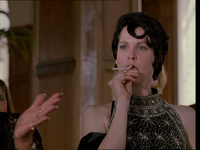 The henchwoman puts an agent to sleep 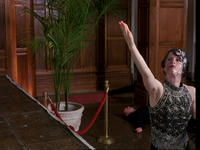 Mary in a cheap plastic mask 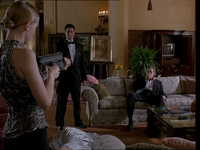 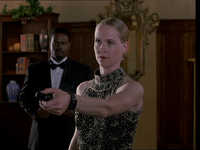 The henchwoman loses her cool - and control 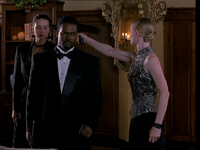 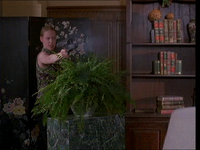 The traitor shoots from cover 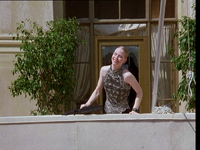 The smiling killer on the hotel balcony 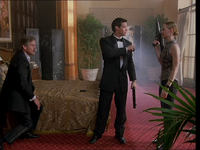 Mary and the Leader make plans 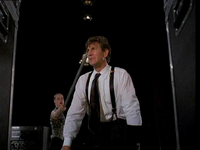 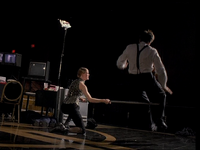 Mary sweeps the hero off his feet 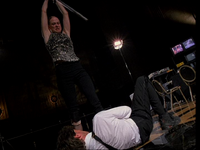 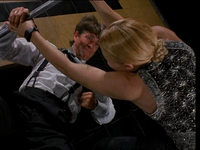 The Replacement battles the henchwoman 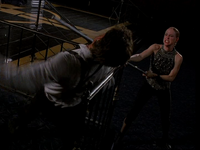 The henchwoman gets a strike in 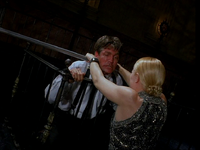 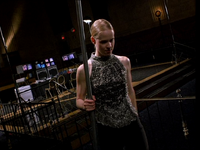 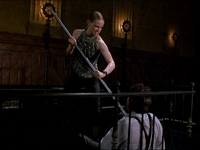 Mary puts on the pressure 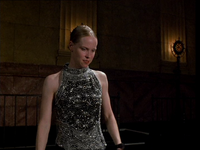 The henchwoman pauses to gloat 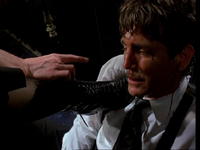 Mary puts her foot down 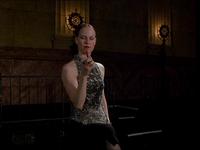 Mary with her fake lipstick 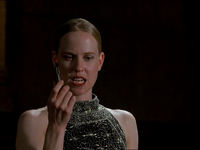 Ready to strike the killer blow 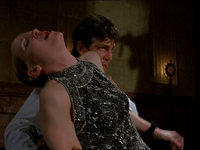 Mary the human shield
Add a photo to this gallery
Retrieved from "https://femalevillains.fandom.com/wiki/Mary_(The_Alternate)?oldid=203368"
Community content is available under CC-BY-SA unless otherwise noted.