Martha Winthrop is the evil aunt of the film's protagonist, Phyllis Allenby (June Lockhart), as well as the domineering mother of Carol Winthrop. Though early in the film, Martha reveals that she was in a relationship with Phyllis' father, Reginald Allenby, long before she married Carol's father, who didn't have a penny to his name. After her husband's death, Martha vowed to set up a better life for Carol; however, her plan included setting up Carol with Phyllis' fiancee, Barry Lanfield.

To do so, Martha planned to convince Phyllis that she was a murderous female werewolf, as part of what Martha dubbed, "The Allenby Curse." In the film, Martha attacked and murdered a young boy, and set up Phyllis in the attack; planting blood on her fingertips. When Scotland Yard was getting close, the evil Martha killed their lead investigator; attacking him while she was out on the prowl. During the attack, Martha snarled and growled to continue the she-wolf facade.

At the end of the film, Martha's plan was working; Phyllis was convinced that she is the she-wolf who had been committing the murders. However, as Martha appeared to tend to her niece, she revealed her plan to Phyllis while drugging her. Martha stated that driving Phyllis to insanity was her original plan, but she decided to kill Phyllis and make it look like she committed suicide, in order for her and Carol to continue to live in the mansion--with Carol married to Barry. Martha brandished a knife and was closing in on killing Phyllis, only to be interrupted by her servant, Hannah, who overheard Martha revealing her evil plan. Hannah shouted to Martha that she was calling the police, prompting the villainess to chase her in an attempt to stop her. During the chase, Martha fell down the stairs, accidentally stabbing herself to death in the process. 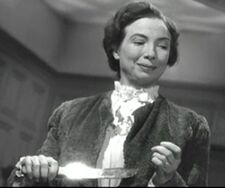 Martha smirking evilly as she brandishes a knife, planning to kill Phyllis 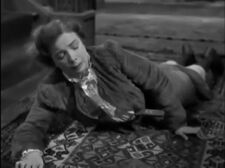 Martha's demise
Add a photo to this gallery
Retrieved from "https://femalevillains.fandom.com/wiki/Martha_Winthrop_(She-Wolf_of_London)?oldid=92275"
Community content is available under CC-BY-SA unless otherwise noted.