Start a Wiki
watch 01:48
The Loop (TV)
Do you like this video?
Martha Simmons is the main antagonist in the 1965 episode ‘Boot with my father‘s name’ of the western TV series ‘The Big Valley.’

Martha Simmons is an attractive older woman and the aunt of one of the protagonists, Heath Barkley. Martha is portrayed by Jeanne Cooper. Martha is the first villainess of the show.

Martha lives in a near-deserted town called Strawberry along with her husband. Before the episode, the psychotic mad-woman, along with her husband, kills Heath’s late mother Leah’s friend Rachel by pushing her down a mineshaft. Martha delusionaly believes that she can make her way up into high society if given money.

She is first seen dusting the hotel while one of the people in town flirts with her. Martha can use her looks to wrap men around her finger, and because she is bored she flirts with the man, leading him on. He eventually kisses her and she slaps him; he then leaves the house. Her husband comes down and reproaches her for leading him on. Suddenly Martha notices Victoria Barkley riding into town on a carriage. The villainess realises this is her chance to get what she wants. After Victoria doesn’t find out what she wants (She wants to know if her late husband loved Leah) from Hannah, who is terrified that she will end up down the mineshaft, Victoria decides to ask Martha and her husband.

Victoria enters, and Martha and her husband hurriedly get coffee for her. Martha pretends that she looked after Heath a lot while he was younger, despite hardly ever going near him. Then Martha asks to be paid by Victoria for her services, and Victoria offers five thousand dollars. When Victoria asks the question, the wicked villainess decides to put the rich woman down and callously tells her that he loved Leah and he didn’t love her. This causes Victoria to leave the house without paying them. Her husband in a rage, Martha tries to explain herself and delusionally tells him about her plan to join high society and threatens to leave him and make off with a rich man, reasoning that because she is attractive a man will take her in.

Later, Victoria is forced into the hotel by Martha’s husband. Martha tells her that Victoria cannot go until she hands over the pay-check and threatens to keep her captive unless she says she doesn’t suspect Martha for the murder of Rachel. Luckily, Heath rides into town and Victoria pushes Martha and slaps her husband and runs out of the house.

The scheming femme fatale tries to get her husband to kill them but he refuses to have anything to do with her scheme and tells her he is tired of her murderous ways. The She-devil then runs out of the hotel screaming for the man that is attracted to her; he comes and she kisses him many times on the lips. Martha then persuades him to try and kill Victoria and Heath, saying that they could threaten them. Obviously not in love with him at all, Martha uses him so her plan can succeed. Although he is killed by Heath at the end, it seems that Martha does not get a suitable comeuppance. 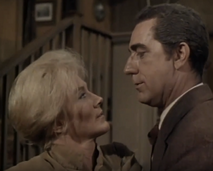 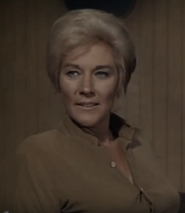 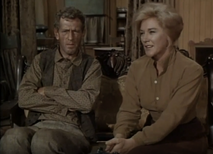 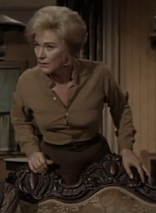 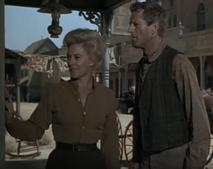 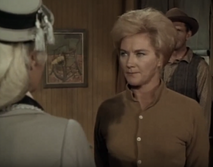 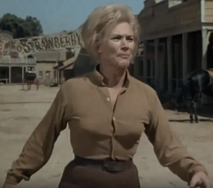 Add a photo to this gallery
Retrieved from "https://femalevillains.fandom.com/wiki/Martha_Simmons_(The_Big_Valley)?oldid=160643"
Community content is available under CC-BY-SA unless otherwise noted.