Start a Wiki
watch 01:51
The Loop (TV)
Do you like this video?
Marta is the main villainess from Werewolf Valley, a story from Adventures of the Unknown #30 (April 1952). She is the evil leader of a werewolf pack at the titular Werewolf Valley, located near the Blue Ridge Mountains.

In the comic, the head of a lumber company was planning to cut down the trees in Werewolf Valley, despite warnings that the werewolves would attack those who enter the land. The logging crew encountered Marta, who offered to show them the way to Werewolf Valley. Later that night, Marta seduced Mike--one of the loggers--into a passionate make out session, only to transform into a werewolf and attack Mike. The villainess' attack was not fatal, as her intentions were to turn Mike and the rest of the crew into werewolves, with Mike undergoing his transformation and attacking one of his fellow co-workers.

On the following day, the evil Marta set her sights on another crew member; seducing him and later transforming and attacking him. As the story progressed, more workers became members of Marta's evil pack, and they attacked the rest of the crew and turned them as well. Finally, Marta revealed herself to the group's boss when she shifted from her wolf form and stated that she was the leader of a werewolf pack, while telling him that they wouldn't be working on Werewolf Valley. The boss ordered his crew to capture Marta, only for Marta to laugh evilly and state that the entire crew are now her werewolf henchmen. Marta ordered the crew to transform, and she sent them to attack and kill their boss. The story ends with Marta and the werewolves in their animalistic form at Werewolf Valley. 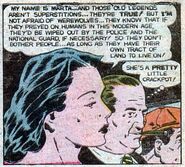 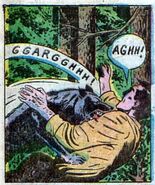 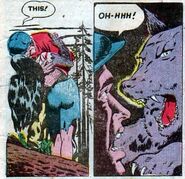 Add a photo to this gallery
Retrieved from "https://femalevillains.fandom.com/wiki/Marta_(Werewolf_Valley)?oldid=76622"
Community content is available under CC-BY-SA unless otherwise noted.