Start a Wiki
watch 01:48
The Loop (TV)
Do you like this video?
Marlene Lupus was the main villainess from The Werewolf Strikes, a story from Adventures of the Unknown #14 (Dec 1949/Jan 1950).

The story takes place a few years after World War II, with Captain Hugh Dixon being informed about the Werewolf Underground; a sinister Nazi faction who had been targeting Germans who had been cooperating with the Allies, even after the war ended. Dixon (along with fellow Captain Alan Marboro) accompanied anti-Nazi activist Hans Castrop to the Black Forest, where he was giving a speech pleading with Germany to denounce their Nazi history. Castrop was later mauled to death by a wolf, which was later grazed by a bullet fired by Dixon.

It was after this that Marlene first appeared and apporached Dixon and Marboro; claiming that she heard the shot and ducked, scratching her arm on one of the rosebushes. The captains picked up Marlene, who caught Marboro's eye, leading to a date later on. The pair began making out, but at that moment, Marlene turned heel and transformed into a werewolf, attacking and mauling Marboro to death. Dixon had figured out that Marlene was a werewolf and the leader of the Werewolf Underground. She was the one who killed Castrop, as the scratch on her arm was actually caused by Dixon's shot.

After Marboro's death, Dixon visited Marlene to find evidence backing up the claim; all the while, Marlene feigned sorrow for what happened to Marboro, blaming herself for what happened to Marboro. Dixon decided to set himself up as bait to catch Marlene, with the trap including taking Marlene on a date in the same wooded area. While the pair were making out, the evil Marlene transformed once again, confirming the suspicions of Dixon, who killed the Nazi villainess with a silver knife.

Marlene's reveal as a werewolf 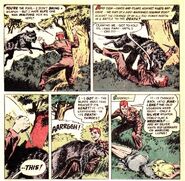 Marlene's defeat and demise
Add a photo to this gallery
Retrieved from "https://femalevillains.fandom.com/wiki/Marlene_Lupus_(The_Werewolf_Strikes)?oldid=98328"
Community content is available under CC-BY-SA unless otherwise noted.