The Female Villains Wiki
Register
Don't have an account?
Sign In
in: 2010s, Attempted Murder, Brunette,
and 10 more

The Marisol Vera Impostor (Valerie Cruz) was the main villainess from "Let This Mother Out," the second-ever episode of the Charmed reboot (airdate October 21, 2018). She is a demonic doppelganger of the real Marisol Vera, the deceased mother of half sisters Mel and Maggie Vera and their half-sister, Macy Vaughn.

The preceding pilot episode ended with the sisters--after learning that they were witches--receiving an ominous warning from what appeared to be their mother while communicating on a Ouija board, with the warning being that the trio shouldn't trust their Whitelighter, Harry Greenwood. The aforementioned following episode had the sisters wary of Harry, while Mel and later Maggie received messages from Marisol. The last message urged the sisters to release her, which they do with a spell. After Marisol is released, she gives more detail about Harry, claiming that he was the one who killed her and he planned to take the girls' powers.

After Mel subdues Harry, Marisol informed her that the sisters had to find the Prism of Souls, under the belief that it would save them from Harry. After the enter through a mirror world, Maggie began to have doubts and believed that the woman they freed was not her mother, but despite this, and the fear that they were in a trap, they acquired the Prism and were able to narrowly exit the realm, only to see Harry holding Marisol at bay and pointing a dagger at her. Harry attempted to warn the girls that what appeared to be Marisol was actually an impostor demon, only for Marisol to reveal facts that only their mother could know, including that Maggie made a bong for her in 3rd grade art class.

However, when Marisol's attempt to get Mel on her side had her saying that it was always the two of them, Mel took the dagger and stabbed Marisol, as Mel knew that her real mother never played favorites. The dagger does not kill the demonic villainess, as she rose up and revealed her true demonic appearance while attempting to kill the sisters and Harry. After Mel used her powers to freeze the evil Marisol, Harry informed the sisters that the only way to destroy the demon was to force her to look at her own reflection. However, with all of the mirrors shattered, Maggie created a makeshift mirror by using her cell phone camera, showing it to the demon and destroying her. 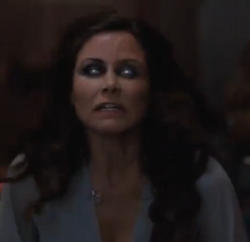 Marisol's reveal as an impostor demon 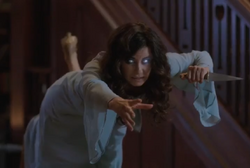 The demon frozen in mid-air by Mel