Start a Wiki
watch 01:51
The Loop (TV)
Do you like this video?
Marique (Rose McGowan) was a minor villainess in the 2011 fantasy remake "Conan the Barbarian".

Marique was the daughter of Khalar Zym, the enemy of Conan.  She was a very evil and powerful witch.

At the young age of seventeen, Marique's mother was arrested and persecuted for practicing dark magic.  Since then, both Marique and her father have been determined to resurrect the woman, and to restore their unity as a family.

In one point, she invokes soldiers made of sand to fight, and poisons Conan with a poison-laced bommerang sword.

After countless battles between Conan and Marique, the young witch finally met her end by the defeat of the barbarian.  He cut off her hand and then Tamara kicked her into a pit, where she got impaled by a large spike below. 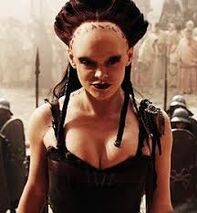 Add a photo to this gallery
Retrieved from "https://femalevillains.fandom.com/wiki/Marique_(Conan_the_Barbarian)?oldid=135821"
Community content is available under CC-BY-SA unless otherwise noted.