The Female Villains Wiki
Register
Don't have an account?
Sign In
in: 1980s, Blonde, Bondage Used On Villainess,
and 10 more

Marigold is a henchwoman to the villain Father Star, and enemy to secret agents James Bond and Suzi Kew. She featured in the James Bond newspaper comic strip published in the UK press.

Marigold is a beautiful if devious looking blonde with shoulder length hair. In the sequence in which she appears she wears underclothes covered by a short virtually see thru white night dress

Callous. She is no good in a fight, despite her having a gun, unarmed agent Suzi Kew soon takes out Marigold.

To kill Bond for her criminal

Disarmed and beaten up

The plot concerns a megalomaniac cult leader called Father Star who is furthering his ambitions for control of the world by brainwashing industrialists and subverting populations, as well as causing physical devastation. Bond's investigation of Star's organization takes him to the Durelle employment agency in Paris, which seems to be a front for Star. In fact, Star's technical personnel are recruited there. Breaking in at night, Bond looks around. But suddenly he's distracted by a buzzing noise, which means he misses seeing a door open thru which a blonde woman enters - pointing a gun in Bond's direction.

The woman identifies herself as Marigold and tells Bond he's been on camera since he broke into Durelle;she callously gloats as she tells him he'll soon be dead. One of the drawers he opened contained an invisible and odorless poison gas. Bond sways on his feet, he seems he's about to collapse. But it's a sham, designed to put Marigold off her guard. It does, and the British agent smashes the gun out of her hand. He yanks up the arms of the protesting gun-girl and binds her. But soon the gas has really does start to affect him. Desperately he telephones the MI6 office in Paris for help - while the bound, sneering female enemy taunts him. Bond collapses to the floor. Marigold manages to get some scissors to free her hands and retrieves her gun.

Meanwhile Bond's colleague, Suzi Kew, stationed at Paris MI6 has arrived at the building in response to his call, highly anxious about Bond's fate. She climbs in thru the window and is very distressed to see Bond lying on the floor. But Marigold is concealed round a corner, her gun in her hand, ready to ambush Suzi. The henchwoman jumps out in front of Suzi, pointing the gun at her and telling her to freeze or die. But Marigold never fully finishes her threat, for a lightening quick and angry Suzi swings her bag smashing the gun-girl in the face. The gun again falls from the henchwoman's hand, as Suzi follows up with a powerful front kick which slams into Marigold; Suzi finishes her off with a karate chop to Marigold's neck; the henchwoman collapses onto the floor.Suzi vows that if Bond is dead she will take revenge on the "filthy little witch" Marigold. Suzi subsequently forces the information she needs out of Marigold (Bond does not die, of course, an antidote to the poison is administered in time).

Marigold, a cheap and callous young blonde, has an arrogant over confidence in herself here which soon becomes a busted flush, not once, but twice - as a stricken Bond can still deprive her of her gun and tie her up, and an unarmed Suzi Kew can give the pistol toting Marigold an even rougher time (very appropriately) only shortly afterwards. Marigold's decidedly unpleasant personality comes strongly over in her sneering and crowing mockery when Bond is (presumably) dying from the gas he's inhaled. Suzi's martial arts style demolition of Marigold (and we know Suzi has no trouble dealing with the likes of her!) is thus much more satisfactory than merely an arrest without any physical payback would have been. 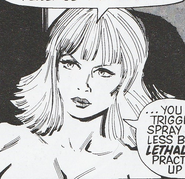 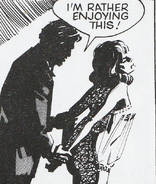 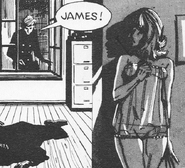 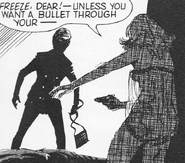 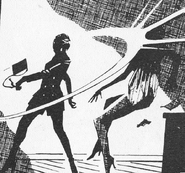 Marigold 5
Community content is available under CC-BY-SA unless otherwise noted.