Start a Wiki
watch 00:17
The Loop (TV)
Do you like this video?
Maria Jimenez (Marcela Mar) was the hidden main villainess of the 2016 Lifetime film Abducted: The Jocelyn Shaker Story (alternately titled Abducted and Abduction of Jocelyn Shaker; airdate February 14, 2016).

Maria had served as the business associate of Javier Moreno for 10 years, and her introductory appearance showed her participating in a business dinner with Javier and his new wife, Caitlin Shaker (the film's main protagonist). During the dinner, Caitlin's daughter (and Javier's stepdaughter) Jocelyn was abducted, and the film's progression saw Javier accused of being involved in and also arrested for the kidnapping. Maria supported Caitlin in her time of need, while the kidnappers later left a note for Caitlin that stated that she was to meet them at 5:00 PM on the roof of a parking garage without any cops present and also pay them 2 million U.S. dollars.

After driving Caitlin to the garage and then holding her at gunpoint, Temo Graniel, a co-worker (and the film's hidden secondary villain), obtained the ransom and revealed himself as a conspirator in the abduction, much to her shock. His subsequent attempt to escape ultimately ended with his death, which occurred when he crashed his getaway vehicle. After that, the protagonist heard his phone ringing and answered it.

In a shocking twist, Maria turned heel and revealed herself as the mastermind behind Jocelyn's abduction, as she was heard telling Temo that what he had done "[wasn't part of] the plan." As it turned out, Maria was in love with Javier, but she became furious with jealousy upon learning that he married Caitlin. Colluding with both Temo and also Captain Rojas of the National Police of Colombia (the film's hidden tertiary and final villain), the maniacal villainess orchestrated Jocelyn's kidnapping, with the crime being committed offscreen during the business dinner that took place earlier in the film. Maria's attempts to scold Temo presumably signified that he had acquired the ransom sooner than she expected, while the call officially revealed her heel persona.

After realizing that Caitlin was on the other end of the phone, the evil Maria cut off the call, quickly becoming aware of the fact that she had accidentally exposed herself as the villainess behind the former's predicament. The protagonist then drove to the house of the delusional kidnapper, where Jocelyn was being held hostage, with the latter holding the former at gunpoint upon seeing her attempting to free her daughter. During her argument with Caitlin, Maria vented over both what she had done for Javier and also her belief that she should have had a daughter with him. The psychotic woman also went on to accuse her captive's mother of being a gold digger and also revealed that she became the majority shareholder of Javier's company in the wake of the abduction. After the villainess concluded her rant by blaming Caitlin for the fact that she didn't have a daughter, the protagonist shut off the lights after insulting the former, prompting Maria to fire her gun twice. The women then engaged in a brawl that led to them crashing through a window and landing in the front yard, where the nefarious conspirator began wringing Caitlin's neck in an attempt to murder her. Moments later, Maria receives the highest of well-deserved comeuppances when she was shot and killed by the arriving Sgt. Susanna Espinosa, bringing Maria's evilness and her scheme to a permanent halt.

Maria acting supportive to Caitlin before her villainous reveal

Maria pointing a gun at Caitlin during their final exchange 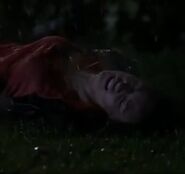 Maria after being shot to death by Sgt. Susanna Espinosa
Add a photo to this gallery
Retrieved from "https://femalevillains.fandom.com/wiki/Maria_Jimenez_(Abducted:_The_Jocelyn_Shaker_Story)?oldid=204166"
Community content is available under CC-BY-SA unless otherwise noted.