Margo Yeager is the main villainess in the 1998 movie Sand Trap. She is played by the actress Elizabeth Morehead.

Margo is introduced as the devoted and beautiful wife of Nelson Yeager, a wealthy but somewhat geeky businessman. After a burglary in their home, they decide to take a trip to Nevada together with their friend and Nelson’s lawyer, Jack Greeley. The trip takes an unexpected turn when Jack pushes Nelson off a cliff and leaves him for dead in the desert, pretending that he fell off the cliff by accident. As the search for Nelson’s body gets underway, Jack and Margo decide to stay around until Nelson’s remains are found. Later that night, Jack enters Margo’s hotel room carrying a gun, and forces her to undress before him. At first, we are led to think that Jack is about to rape Margo after killing her husband, but it turns out that the sex play is in fact consensual, and that Jack and Margo have been lovers for some time. It was they who organised the burglary, and plotted Nelson’s death in the desert. In the following scenes, Margo reveals herself as the real instigator of the several attempted murders.

Little do they know that Nelson, though injured from the fall, is alive. Disoriented, he walks through the desert in search for help. This obviously makes it harder for the search party to find him. Margo suddenly has doubts about her husband’s demise, and she and Jack organise a search party of their own, obviously to a very different end: after finding Nelson in the desert, they will kill him. While driving around they eventually find him wandering around in the distance. Jack accelerates quickly towards Nelson in an attempt to hit him, Margo ducks just in case Nelson sees her, since he is still unaware she has betrayed him. She starts to get excited by the chase and says she wishes she could see Nelson's face. During her excitement she starts to give Jack a blowjob as he speeds towards Nelson, this distracts him however, and he misses Nelson with the car, Nelson then manages to temporarily escape. After a while, Nelson runs into Margo and thinks he is saved. The evil Margo pretends to be happy, too, but in reality she waits for Jack to sneak up behind them with his gun. As Nelson won’t let go of Margo, Jack hesitates to shoot him. When Margo finally kneels down and cries “Kill him, Jack!”, Nelson figures out that his beautiful wife was not so devoted after all, and is after his life and money. Jack is out of bullets, however, and Nelson flees into the desert.

The rest of the movie is basically about Margo and Jack chasing Nelson in the desert. Unfortunately for them, they seem to have underestimated Nelson, as he shows remarkable survival and hiding skills. As the hunters become the hunted, Jack increasingly loses his nerve and tries to talk Margo into calling off the chase. The villainess responds by violently grabbing Jack’s testicles, thus forcing him to submit to her. On another occasion, when a panic-stricken Jack turns his gun against Margo, she uses seductive gestures and talk to make him succumb once again. The evil blonde shows herself to be the more unscrupulous and devious of the two. She is also sexually aroused by the sight of violence, as we learn in a scene where she eagerly offers herself to Jack after he beat some other guy to a pulp. On other occasions, Margo constantly bullies Jack and blames him for their continuous failure to kill her husband.

Finally, they manage to corner Nelson into a cave. From outside, Margo calls Nelson all sorts of things, reveals that she aborted their child, and never ever loved him. She goes on about what a great lover Jack is, but when the latter touches her, she reacts with revulsion, showing that she does not care about either Nelson or Jack. Once again, Margo shows herself to be a mean, greedy and self-centred woman. After Nelson managed to escape from the cave, Margo decides to kill Jack by shooting him. She is then attacked by her husband who, after a brief struggle, manages to grab the gun. With the tables suddenly turned on her, the deceitful Margo tries to cry herself out of the situation, telling Nelson that she’s sorry and that they can start all over again. Nelson angrily empties the magazine into Margo’s direction, but misses on purpose, showing that he does not want to be a killer like her. He then throws the gown into the bush and walks away. Realising that she has escaped death, Margo’s facial expression turns, suggesting that she never had any remorse and sees another, perhaps last chance to kill Nelson. She produces a single bullet from her pocket and makes a move to get hold of the gun. However, she gets bitten by a snake, whose venom immediately acts as Margo shows signs of pain and weakness. Clearly with an effort, she leans on the gun as she slides the bullet into the magazine. By doing so, rather clumsily as a result of her agony, she buries the barrel deep into the sandy ground. Nelson urges her not to make a mistake and offers his help to get her out of the desert and into medical care. Knowing that she would face murder and attempted murder charges, but above all driven by blind hatred, Margo furiously tells him to shut up and aims the loaded gun at him. When she fires the shot, the weapon explodes because the barrel is clogged with sand. The shot goes to the rear, and we hear Margo hitting the ground heavily. In the following scene, the villainess lies dead and disfigured. Her body is left to fry in the desert heat, while Nelson walks away a free man. 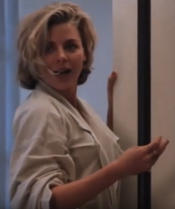 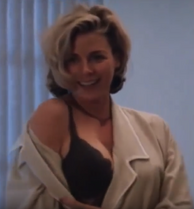 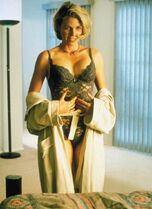 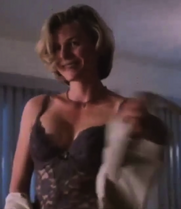 Add a photo to this gallery
Retrieved from "https://femalevillains.fandom.com/wiki/Margo_Yeager_(Sand_Trap)?oldid=191637"
Community content is available under CC-BY-SA unless otherwise noted.