The Female Villains Wiki
Register
Don't have an account?
Sign In
in: 2010s, Attempted Murder, Blonde,
and 14 more

Margo Vicky (Chris McGinn) was the main villainess of the 2017 thriller Kidnap. She was the wife of Terrence Vicky and the two were part of an international child abduction ring, kidnapping children and selling to buyers. The third member of the villainous operation was Del, the Vickys' neighbor. Prior to the movie's events, Margo and Terrence had abducted two young girls and were keeping them trapped in the attic of a smaller house on their isolated property.

The movie began with Margo kidnapping Frankie Dyson, the young son of protagonist Karla Dyson, from a park by luring him to her and Terrence's armored car and forcing him inside. When Karla gave the duo chase, the villainous couple tried to force her off their tail, bashing her car and even hitting a police officer on a motorcycle before Karla could get help from him. The evil Margo eventually got Karla to exit the highway by holding a knife to Frankie's throat.

Later on, after Karla caught back up with Margo and Terrence and had a confrontation with Terrence, Margo approached her in her car and told her that she and her husband would let Frankie go once Margo took them to her bank and withdraw all her money for them. Karla reluctantly agreed to the plan and let Margo into her car, following Terrence. But once they were in a tunnel, Margo hit Karla in the head and tried to take control of the car. Karla managed to fight back, though, and eventually threw Margo from the car and put on her jacket to make Terrence believe she had succeeded in killing Karla. Margo managed to hitch a ride back to her and Terrence's home while Terrence was killed by Karla as he attempted to kill her.

After tracking down the Vicky household, Karla broke into the house and listened as Margo got a phone call from Del, informing him of Terrence's absence and how Karla had been causing trouble for their operation. When she heard Karla trying to break Frankie and her two other captives out of the attic, Margo loaded a shotgun and went outside with her guard dogs, having them run after Karla and Frankie, who were on the dock of the nearby lake. Karla and Frankie tried to hide under the dock, but the dogs found Frankie. Margo prepared to shoot Frankie when Karla attacked her, pulling her off the dock and into the water. Despite Margo's attempts to fight back, Karla managed to get the upper hand over Margo and drown her to death. 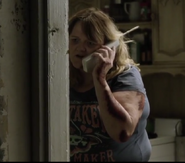 Margo on the phone with Del 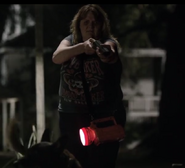 Margo with her shotgun

Margo being drowned by Karla
Community content is available under CC-BY-SA unless otherwise noted.