Start a Wiki
watch 01:51
The Loop (TV)
Do you like this video?
Margo Hess is the villainess in the Summer of 1952 story "Space Pirates" in the comic Space Patrol #1.

Traveling near the asteroid Hela, Dr. Hess and his wife Margo Hess argue over the propriety of stealing the freighters with a high-powered magnet. Dr. Hess refuses, but Margo threatens to turn here 'boys' on the doctor in a threat of violence. Dr. Hess accedes to the demand and captures a freighter, pulling it to Hela. They see Corry's freighter as well, and pull it in. Buzz and Hap parachute out of the captured vessel. Their space suits are caught by the magnet, and Buzz and Hap are captured by the space pirates. Corry arrests the pirates, but Margo slaps his face off for the impudence. She lets the pair of Space Patrollers go, and they fly away with their rocket packs. Sklar is surprised at the move, but Margo lets them get to a distance before capturing them suspended by the magnet. She tells Corry and Happy they can join with the pirates, or she will turn on the magnet and drag them to their deaths at 30,000 miles-per-hour. Buzz refuses, so Margo makes good on her threat, forcing Dr. Hess to turn the magnet on full blast.

Corry orders Hap to shoot his "atomic rocket gun". This enables them to resist the magnet enough to set them free of its influence. They contact a space patrol unit, which handily mops up Margo Hess's space pirates of Hela. 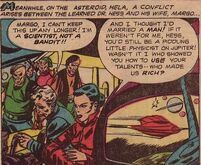 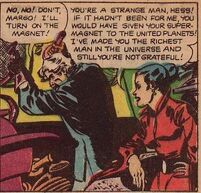 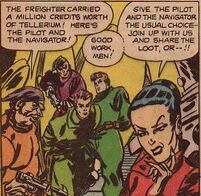 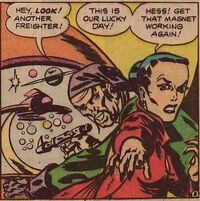 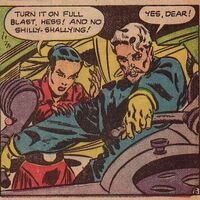 Add a photo to this gallery
Retrieved from "https://femalevillains.fandom.com/wiki/Margo_Hess_(Space_Patrol)?oldid=156273"
Community content is available under CC-BY-SA unless otherwise noted.