Start a Wiki
watch 01:50
The Loop (TV)
Do you like this video?
Marge McAlder is the hidden villainess in the 1949 episode "Battle of the Monsters" for Jo-Jo Comics.

Marge McAlder meets Jo-Jo The Congo King in the jungle.  She has been hired as the civil engineer in charge of laying railroad tracks along the Congo.  She asks Jo-Jo for help, since she is in a race with another railroad company from the other side.  The first one to reach a given point gets the sole contract to operate a road and can buy out the loser.  She tells Jo-Jo that some of her men are disappearing, and fears that the other railroad is responsible.

From there, Jo-Jo met with Matt Trent, who was running the opposing railroad.  He tells Jo-Jo that Marge is lying, and that her company is phony and trying to steal contracts.

In the meantime, Marge kidnapped Jo-Jo's mate, Tanee.  She then  brought Tanee with her as a hostage, and told Jo-Jo to meet her.  At gun point, Marge and her henchman gave Jo-Jo some dinomite and told him to blow up Trent's engine.  When he refused, Marge brought out her hostage and threatened to kill her if he refused.

Jo-Jo went back to Trent and devised a plan.  He would have Trent set off the dinomite in half an hours time, as he ran back to Marge's camp and try to overpower them.

As the explosion took place, the henchman turned his gun and was about to shoot Tanee.  However, Jo-Jo lept out of the bushes and knocked him out.  Marge escaped into the jungle.

Jo-Jo returned to Trent's engine, and the he and Tanee got on the locomotive.  They headed toward a tribe that was attacking the railroad workers at their camp. Marge was behind this uprising, and she was seen mounted on an elephant with a rifle, along with natives.

The locomotive slammed into the natives and their elephants, and the collision caused Marge to lose her balance and land in the path of the train.  She was run over by the train.

Jo-Jo speaks, "It is always so, with evil doers!  Sooner or later crime catches up with them and they pay the price that justice demands, which is usually their own worthless lives!"  With the death of the evil lady, the natives fell on their knees and begged for Jo-Jo's forgiveness. 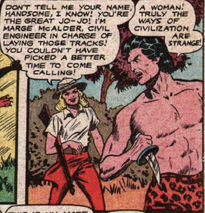 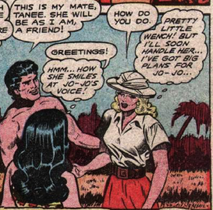 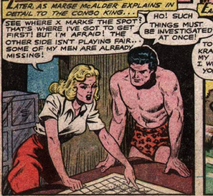 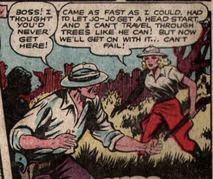 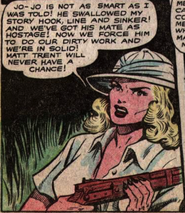 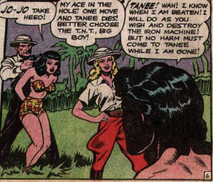 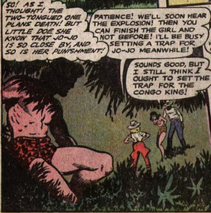 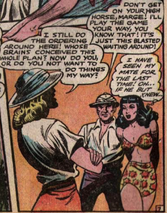 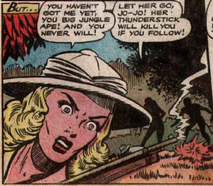 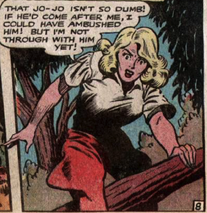 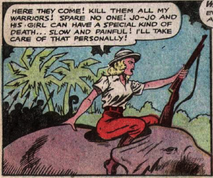 Add a photo to this gallery
Retrieved from "https://femalevillains.fandom.com/wiki/Marge_McAlder_(Jo-Jo_Comics)?oldid=155925"
Community content is available under CC-BY-SA unless otherwise noted.