Margaret Littlewood is a recurring character from the Criminal Case series, appearing in three cases in Grimsborough's Historical Center district before appearing as the villainess of case #31, "Dog Eat Dog" (release date June 14, 2013).

Margaret was a regular competitor in Grimsborough's annual Dog Pageant, which she entered with her dog Astrid. When fellow competitor Molly Robinson was found dead in the pageant arena along with her dog Poochikin, Margaret was questioned by detective David Jones and the player, with Margaret suggesting that botanist Charles Parker could be the killer, as he was known for deeply hating the Dog Pageant.

However, the investigation revealed that it was Margaret who was the true killer. With Molly's dog being Astrid's biggest competitor in the pageant, Margaret made a carrot cupcake laced with poison and gave it to Poochikin to kill her. Molly also ate some of the cupcake, and died alongside her dog at the pageant arena. After that, Margaret poisoned the dogs of James Savage and Gertrude Piccadilly, who were both also competing in the pageant, with Margaret using ether to knock out James' husky before killing him. When David and the player came close to uncovering the truth, the evil Margaret also gave David a poisoned cupcake, causing him to be hospitalized.

With David's condition worsening due to Margaret's poison, the player and police officer Eduardo Ramirez rushed to find the killer and discovered Margaret's secret. After being confronted by Eduardo and the player, Margaret confessed to her murders and her poisoning of David Jones, ranting that the dog pageant was her only chance to shine and that she'd hoped killing David would stop the player from continuing the investigation out of grief. Margaret was arrested and, during her trial, gave up the antidote to save David's life--on the condition that he enter Astrid into the dog pageant for her and take care of her during her prison sentence. Afterwards, Margaret was sentenced to life imprisonment by judge Olivia Hall, with the possibility of parole in fifteen years.

Margaret later re-appeared in Criminal Case: The Conspiracy in case #20, "No Mercy for Old Men" (release date May 31, 2018), having been released from prison after developing dementia and being placed in the Shady Hollow nursing home. The player and Gloria Hayes attempted to question Margaret in regards to the murder of Shady Hollow resident Sam Chey, only for Margaret's dementia to leave her answers mostly unintelligible. Margaret was later considered a suspect, however, when it was uncovered that Margaret used to date Sam in her youth, only for him to end things by standing her up on a date, with Margaret (believing she was still 19) being enraged at Sam for that. But ultimately, Margaret was proven to have no involvement in Sam's death. 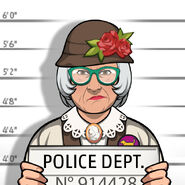 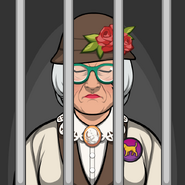 Margaret's appearance in Criminal Case: The Conspiracy
Add a photo to this gallery
Retrieved from "https://femalevillains.fandom.com/wiki/Margaret_Littlewood_(Criminal_Case)?oldid=102765"
Community content is available under CC-BY-SA unless otherwise noted.