Start a Wiki
watch 01:51
The Loop (TV)
Do you like this video?
Marcie Tobin (Diane Farr) is a villainess from "Cats in the Cradle," episode 2.20 of CSI (airdate April 25, 2002). She is the daughter of construction company owner Barclay Tobin and the wife of foreman Jonathan "Johnny" Claddon.

Marcie was introduced as the survivor of a car bombing, as she informed Sara Sidle about how she noticed her car making a strange noise, and it led to the revelation of the bomb being placed in the car. She added that the only people with access to her car were herself and Johnny, with the latter becoming a major suspect. Sara and Nick Stokes' interview with Barclay revealed that Johnny was rumored to be having an affair--a claim that Johnny denied, though he remained a suspect when a stick of dynamite had went missing from the site, with Johnny stating that it was stolen.

Regarding the cheating rumors, Marcie herself stated to Sara that she had her suspicions when Johnny would return home late from work, with Johnny stating that Barclay was working him very hard, after which Marcie stated that they were strong as a couple while informing Sara to continue her search in her house. A second encounter with Marcus Reminick, the mechanic who was on call on the night of the explosion, not only revealed that he had a criminal history, but his prints were on some of the parts used for the bomb. Sara's deeper search, which she referred to as a "shot in the dark," ended up revealing the truth:  Marcie was the true mastermind of her own bombing.

As Sara pointed out to Marcie during her interrogation, Marcie not only planted the bomb, she built it. Regarding a motive, Marcie owned 25% of her father's company, but in a divorce settlement, Johnny would own half. However, if Johnny was convicted of a crime, Marcie would get everything, and with that, Marcie masterminded the bombing scheme and planned to set up Johnny as her attempted killer. The villainess began her plot by stealing the dynamite from Johnny's car, as well as an end cap from inventory, knowing that her husband would be implicated. Afterwards, Marcie and Marcus built the pipe bomb and placed it in the former's car, with the bomb going off just sixty seconds later. It was after the explosion that Marcie portrayed the role of a victim of a near fatality to cover up her persona as a greedy villainess, and it was also revealed that Barclay was part of her scheme, as they paid Marcus $50,000 for his cooperation.

In response to the accusations, the evil Marcie callously stated that building a bomb wasn't illegal, and even added that nothing should happen to her due to the fact that it was her car that exploded and Johnny was "fine." Jim Brass reminded Marcie that she and Barclay conspired to frame Johnny for attempted murder, and Nick stated that the villainess was looking at 20+ years in prison, adding that Johnny would receive a promotion as well. Marcie was officially arrested (off-screen) following her interrogation. 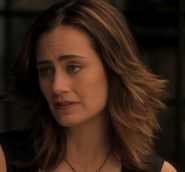 Marcie's interrogation and reveal
Add a photo to this gallery
Retrieved from "https://femalevillains.fandom.com/wiki/Marcie_Tobin_(CSI)?oldid=164086"
Community content is available under CC-BY-SA unless otherwise noted.