Mara Schumer is a villainess from the 76th Fansadox story Space Pirates by Fernando.

She is an evil space pirate who is first seen broadcasting a fake emergency call to a space station containing Dr Emma Harris, she claims to need emergency repairs and asks to dock at the doctor's station. What the doctor doesn't know is she is part of an evil pirate gang who capture women to be sold into slavery. Mara and the other pirates board and capture the doctor.

A girl being held captive by the pirates is brought on board to the station to be made an example of to Dr Harris, to show what happens if she doesn't submit to them. The evil Mara whips the slave girl with a tazer whip, causing her to experience absolute agony and start coughing up blood. Mara then continues torturing her with the tazer whip and gets sexually aroused by the cries of pain coming from the poor girl.

Later Dr Harris is taken to a room where she is raped by Mara and then forced to service her orally. A colleague of Dr Harris' makes communication with the station so she can dock, and when she does Mara attacks her with the tazer whip and takes her captive.

All the women are then taken to another planet where they are to be auctioned off to the rich as slaves. One of the slave owners decides to have Dr Harris tortured and killed for the entertainment of the bidders in attendance. Mara is seen in the crowd enjoying the sadistic show.

Mara fakes an emergency signal to the good doctor

The evil Mara with her tazer whip in hand

Whipping a slave girl with her tazer whip 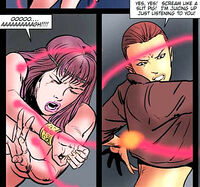 Dr Harris trapped between the legs of the evil Mara
Add a photo to this gallery
Retrieved from "https://femalevillains.fandom.com/wiki/Mara_Schumer_(Space_Pirates)?oldid=194758"
Community content is available under CC-BY-SA unless otherwise noted.