Start a Wiki
watch 01:24
The Loop (TV)
Do you like this video?
Mandy Rose is a professional wrestler currently competing in WWE, where she portrays a villainess.

Mandy Rose debuted as one of the 13 finalists on Tough Enough, where she served as the lead villainess and feuded with Sara Lee. She finished as the female runner-up behind Sara Lee, and on January 30, 2016, Mandy made her in-ring debut at an NXT live event, competing on the heel side of a six-woman tag team match. Mandy teamed with fellow villainesses Billie Kay and Peyton Royce in a losing effort against Aliyah, Liv Morgan, and Mandy's Tough Enough rival, Sara Lee.

Mandy Rose made her main roster debut on the November 20, 2017 episode on Raw, aligning with fellow Tough Enough and NXT alum Sonya Deville and returning villainess Paige in attacking Bayley, Sasha Banks, and Mickie James during their #1 Contender's match. The villainesses later attacked Raw Women's Champion Alexa Bliss in a backstage segment. The following week the evil trio announced that they were called Absolution, and then proceeded to attack Sasha Banks in the ring, after taking out both Mickie James and Bayley backstage.

In 2018, Mandy Rose competed in the first ever Women's Royal Rumble match and the first ever Women's Elimination Chamber match, but made history as the first woman eliminated in each match. Mandy was eliminated by Lita in the Women's Rumble and by Sasha Banks in the Women's Chamber. Both Mandy and Sonya Deville were moved to SmackDown in the second annual Superstar Shake-up, but despite Paige being the brand's General Manager, they were informed that Absolution was over and that they wouldn't receive special treatment. Mandy picked up her first SmackDown victory by defeating Becky Lynch, but on May 15, she was defeated by Becky in a Triple Threat Match that also included Sonya; a match that was also for a spot in the Women's Money In The Bank Ladder Match. 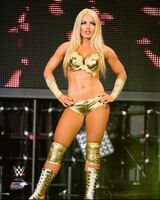 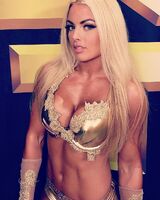 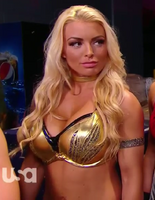 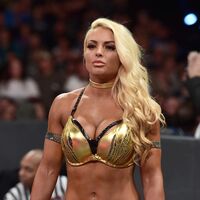 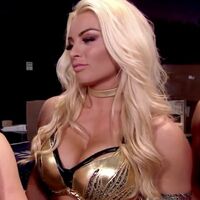 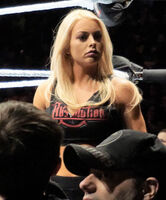 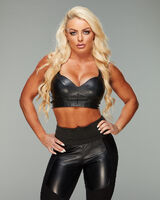 Smackdown 25th June 2019
Add a photo to this gallery
Retrieved from "https://femalevillains.fandom.com/wiki/Mandy_Rose_(WWE)?oldid=187677"
Community content is available under CC-BY-SA unless otherwise noted.