Mama Mione, a former champion skiier, is the owner and chef of her own cafe, but in actuality, she used her cafe as a front for her criminal activities, which included hiding convicts in a secret luxurious hide-away under the old prison on Skull Island. She did so by smugging the escapees inside shark-like torpedoes, and disguised herself as Iron Face to scare others away.

Mystery Inc. encountered the villainess in her disguise in the beginning, when she chased the group while they were water-skiing. She also attempted to chase Scooby and Shaggy off the island while they were investigating. Mama Mione was caught and unmasked after Fred used a magnet to trap her while she was chasing Scooby and Shaggy, and she was later arrested.

Mama Mione resurfaced in the 2014 film, Scooby-Doo! Frankencreepy, aligning with past Scooby Doo villains Cuthbert Crawls, C.L. Magnus, and Lila to get their revenge on Mystery Inc. She disguised herself as Mrs. Vanders, the housekeeper of Castle Von Dinklestein, and hypnotized Velma into becoming a mad scientist and completing her uncle's experiment. Mama Mione and the rest ot the group were caught by the group, and she was again arrested.

Mama Mione under the water 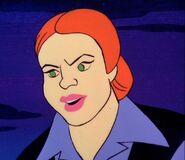 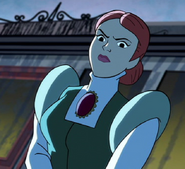 Mama Mione in Frankencreepy
Add a photo to this gallery
Retrieved from "https://femalevillains.fandom.com/wiki/Mama_Mione_(The_Scooby_Doo_Show)?oldid=175187"
Community content is available under CC-BY-SA unless otherwise noted.