Malligo (Kelley Missal) and Marg Dyer (Courtney Lakin) were the main villainesses from "In Plain Sight," episode 4.02 of Sleepy Hollow (airdate January 13, 2017). They (along with their sister, Moll) were ancient witches who actually contributed to exposing Benedict Arnold as a traitor. In the present day, the trio was shown with Malcolm Dreyfuss, who was attempting to hand over an ancient blade for the Witch Stone, which they had been protecting. After Moll refuses to hand it over, Dreyfuss stated that Moll had lied to the sisters about the artifact. Using their power to detect lies, Malligo and Marg realized the truth about Moll, leading to the evil pair killing Moll with their spell.

Moll's death allowed Malligo and Marg to run amok in the present day, as they are later shown killing a pair of guys (who each had wives) attempting to hit on them. In the episode's climax, the wicked witches encountered Ichabod Crane, Jenny Mills, and Diana Thomas at their ancient home, which they had glamoured. Malligo went after Crane, while Marg fought against Diana and Jenny, and during the encounter, Malligo attempted to kill Crane. At that moment, however, the sisters' ancient grandfather clock--the key to their powers--suddenly goes haywire after it was tampered with by Diana. This caused Malligo and Marg to age rapidly before both were destroyed, along with the clock. 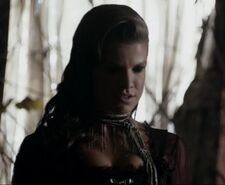 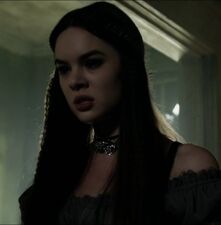 Add a photo to this gallery
Retrieved from "https://femalevillains.fandom.com/wiki/Malligo_and_Marg_Dyer_(Sleepy_Hollow)?oldid=62169"
Community content is available under CC-BY-SA unless otherwise noted.