Start a Wiki
watch 01:48
The Loop (TV)
Do you like this video?
Malena Bernal (Lorena Bernal) is a villainess in the 2007 episode "Chuck Versus the Tango" for the TV series "Chuck".

Malena is a mysterious arms dealer who operates under the code name La Ciudad.  As La Ciudad, Spanish for "the City", she has gained a reputation as the world's most elusive and dangerous arms dealer, surviving by killing everyone who sees her face. Everyone believed that La Ciudad was male: nobody had ever seen her and lived to tell about it.

In the episode, she attends an art auction at Wiltshire Strand Hotel, planning on purchasing an ugly water lily painting that had weapons grade plutonium hidden inside its frame. While speaking to Chuck Bartowski (Zachary Levi) about the painting, she recognizes that Chuck knows something about the painting and offers to dance the tango with him in order to seduce him into telling her what he knows. Chuck sees a scar on her neck, and he realizes that Malena is La Ciudad and asks her a question on what she does for a living. This along with Morgan, via phone call, IDing Chuck as Bartowski not Carmichael, which he had previously told her, makes Melena suspicious and Chuck is taken hostage.

In La Ciudad's room, she tries interrogating him, in which he tries insisting on his Carmichael identity, only to blurt out his real name when a knife is thrown close to his groin. Ciudad then tries prodding Chuck into telling her whom he works for. When he denies, her henchmen pick up the chair he strapped to, threatening to throw him off the balcony. He then confesses about the painting being a fake. He also manages to convince her he's just a computer repairman, but she still resolves to kill him since he can identify her. Casey (Adam Baldwin) and Sarah (Yvonne Strahovski), who have managed to locate Chuck, intervene, and force her to flee. She and her henchman rappel a floor down. Marlena's henchman tells her that they have to get her out of the country. However, La Ciudad says that they must first take out Chuck, having snatched his Buy More card.

Whilst Melena sends her henchmen into the Buy More she poses as a delivery girl and goes to a store roof where she starts to set up a sniper rifle. Sarah, who noticed her as she passed, comes up to the roof and starts a fierce hand to hand catfight where Sarah eventually wins and handcuffs her to a pole. It is assumed that she is properly arrested afterwards and taken away to jail.

It's later implied that she works for Volkoff Industries as her bodyguard Yuri the Gobbler reappears in season 4 as Volkoff's top bodyguard. 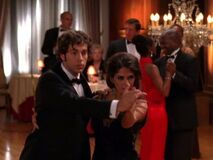 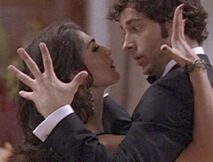 Add a photo to this gallery
Retrieved from "https://femalevillains.fandom.com/wiki/Malena_Bernal_(Chuck)?oldid=167661"
Community content is available under CC-BY-SA unless otherwise noted.