“"I followed Muten Roshi as directed. He is training the boy, Son Goku. I could disrupt them."”
―— Dragonball Evolution

Mai (マイ) is a character in the 2009 film Dragonball Evolution. She is an adaptation of Mai, one of Emperor Pilaf's esteemed servants in Akira Toriyama's Dragon Ball franchise, and is portrayed by Eriko Tamura.

In Dragonball Evolution, rather than being one of Pilaf's servants, Mai is the personal servant and assistant of Lord Piccolo, and assists him in taking the Dragon Balls in order for Piccolo to conquer the universe.

Mai has an all red suit and carries sharp three point stars on her belt, along with a gun holster on her hip and wears red knee-boots with high heels. Her suit has an opening above her chest, revealing cleavage. Her other outfit is a black-and-red fighting bodysuit in the tournament scene. She has straight, black hair that reaches her neck.

Mai is introduced in the scene where she murders a peasant woman named Seki to get a Dragon Ball for Lord Piccolo. She then tracks down Goku and his grandfather in search for the Dragon Balls. She alerts Piccolo and infiltrate the grandfather's home when Goku goes on a date with Chi Chi. She threw her shuriken at the grandfather, only for them to be blocked. Piccolo claims the Dragon Balls aren't at the house and destroys it, taking the grandfather with it. While they are traveling over lava, Goku finds another Dragon Ball, distracted by his visions Mai takes the opportunity and kicks him in the face and takes the Dragon ball but Goku catches her they both have a short fight, Mai does a strong punch to Goku's face however it didn't affect him he kicked her into a pit.

Later, Chi-Chi has a battle with Mai in a competitive match; as Chi-Chi strikes, Mai blocks her attacks and manages to cut Chi-Chi taking some of her blood in a capsule for future purposes. She then also forfeits much to Chi-Chi's disappointment. She later takes on Chi-Chi's appearance with the aforementioned blood usage, but is stopped by the real Chi-Chi which begins another fight between themselves. Goku watches the fight from a distance but quickly comes over to see what was happening, Chi Chi (Mai) begs for his help which causes Goku to attack the wrong one. By the time he realizes it to be too late, he is shot by Mai who then escapes successfully.

During the final battle between Goku and Piccolo, Mai tracks down Bulma who releases a trap but with Mai's skills she easily dodges it. They have a short fight but Mai easily dominates Bulma with her hand-to-hand combat. Just as she had the advantage over Bulma, Yamcha shoots her in the back defeating her.

Mai is excellent in martial arts capable of going toe to toe with Bulma and beating her quickly and being a slight equal match to Chi Chi. Mai has shuriken she throw's with exceptional aim, Mai is also shown to be very agile easily dodging Bulma's trap without trouble. When Bulma shoots her guns Mai has enough speed and reflexes to dodge every single bullet.

Differences from the manga/anime Edit

In the manga and anime Mai worked for Emperor Pilaf while in the movie she worked under Piccolo. While in the manga and anime Mai has a more comedic appeal and is less serious, while the film adaptation she is more serious and has a more level-headed approach, being more adapted and capable of handling some situations and it would seem that she is also more powerful than her manga counterpart capable of using excellent martial arts and agility.

"In Dragonball, I was thrilled to be cast in this role, especially since they were looking for an actor of any ethnicity to portray this strong character. This was my first studio film in the U.S. and I played a villain for the first time in my career! Mai, the character I play, is a killer. I also got to do a lot of wire action scenes. That was so much fun! Filming Dragonball definitely brought new challenges and I loved it." 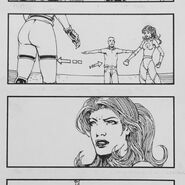 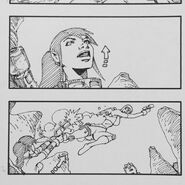 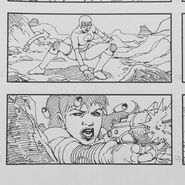 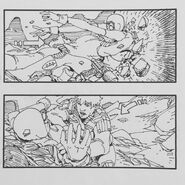 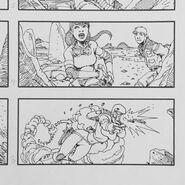 Mai is an enemy and hidden playable character in the game. Official description: "Mai is single-minded in her devotion to Lord Piccolo. She has entered the tournament to eliminate any threats to his person. She plans on fulfilling her task with extreme prejudice." 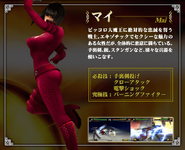 Add a photo to this gallery
Retrieved from "https://femalevillains.fandom.com/wiki/Mai_(Dragonball_Evolution)?oldid=197653"
Community content is available under CC-BY-SA unless otherwise noted.