Magda is an evil female hunter from Jo-Jo Comics #15. She appears in the story The Huntress Of Dead Moon Valley.

She is a rich hunter who has grown bored of killing animals and can now only get a thrill from taking a human life.

She moves to Dead Moon Valley in the Congo in order to continue a life of hunting, she pays the local tribal people and their leader Jo-Jo, to build her a house.

Jo-Jo seems confused and tells her Dead Moon Valley has no beasts to hunt, but she tells him that she is rich and can have those she wishes to hunt brought to her. Jo-Jo is still curious when Magda goes out each day on hunts but never returns with a catch.

Later a tribal member manages to flee and informs Jo-Jo's mate Tanee that he and others were taken to Dead Moon and hunted like animals by Magda. Tanee runs to find Jo-Jo to warn him about Magda's intentions. But Magda discovers them and finds out they know about her desire to hunt humans. Ever since she eyed Jo-Jo she had wanted to hunt him and tells him this, she sees him as the ultimate trophy. Jo-Jo fearing for Tanee's safety allows Magda the pleasure of hunting him.

The two go out into the open and the hunt begins. A leopard manages to find and attack Magda during this and Jo-Jo decides to save her, Magda thinks he's an idiot for saving her and sees this as an opportunity to kill him. She gets him at gunpoint and this is seemingly the end of him, but Tanee is up on higher ground and pushes a giant rock down the hill, the rock crushes Magda, killing her. 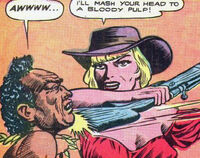 Punishing a tribesman for being a coward 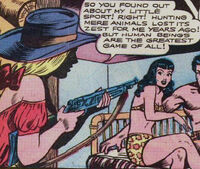 Revealing her evil intentions to Jo-Jo 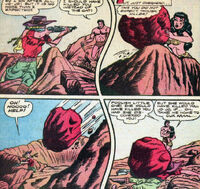 Reduced from a position of power to her death in seconds
Add a photo to this gallery
Retrieved from "https://femalevillains.fandom.com/wiki/Magda_(Jo-Jo_Comics)?oldid=160631"
Community content is available under CC-BY-SA unless otherwise noted.