Start a Wiki
watch 01:48
The Loop (TV)
Do you like this video?
Madison Rayne is a professional wrestler best known for competing in TNA, where she portrayed a villainess.

Madison debuted in 2009 and quickly turned heel and became the newest member of The Beautiful People, with Angelina Love and Velvet Sky. Within months, Madison captured the Knockouts Tag Team Championship with Velvet and new member Lacey Von Erich, with the trio defending the titles under the famous Freebird rule, and at Lockdown in 2010, Madison captured the Knockouts Championship when she pinned Tara in a tag team match for all of the championships. On the following month's Sacrifice PPV, Madison defeated Tara (who turned villainous at Lockdown) in a Title vs Career Match, ending Tara's career.

Later in the year, Madison formed an alliance with evil Knockouts VP Karen Jarrett, as well as returning villainess Gail Kim. Gail and Madison captured the Knockouts Tag Team Championship in November 2011, and held the titles until March 2012. Later in 2012, Madison recaptured the Knockouts Championship, while also beginning a romance with referee Earl Hebner. After Taryn Terrell was brought in as the new Knockouts referee, Madison lost the title four days later to Brooke Tessmacher, and later went on maternity leave due to her pregnancy.

Madison returned from maternity leave in December 2013, and later defeated Gail Kim to capture the Knockouts Championship once again. In August 2014, months after losing the title to Angelina Love, Madison was interviewed right before she was set to compete in a #1 Contender's match against Taryn Terrell. During the interview, Madison displayed a heel persona by saying that she is the queen of the Knockouts and that she would prove it to Taryn. Madison attempted to cheat her way to victory by using the ring ropes, but she was caught and later defeated by Taryn.

On October 8, Madison defeated Taryn and Angelina Love in another #1 Contender's Match, grabbing Taryn's tights for the victory to continue her role as a hidden villainess. Madison laughed evilly as she celebrated her win, only to abandon Taryn when Havok entered and attacked her. Madison's title opportunity came on the following week, but she was defeated by Havok.

Madison teamed with Taryn against The Beautiful People on October 29, but she mostly refused to tag herself in during the match. She finally entered and took down the BPs, but after that, the evil Madison attacked Taryn with a kick to her head, and later delivered her Rayne Drop finisher to Taryn. Madison's villainous turn allowed the BPs to win, and after the match, Madison gave an evil smile as she walked away. Two weeks later, Madison was defeated by Taryn in a grudge match.

Madison turned into a villainess once again on the July 21, 2016 episode of Impact Wrestling, attacking Gail Kim after Maria Kanellis promised a reward for whoever takes out Gail. After the attack, Madison stated that it was nothing personal, and that she was looking out for herself. Madison lost to Gail in a grudge match a week later, and made sporadic TV appearances since then. After appearing as a babyface during the remainder of 2016, Madison became a villainess one last time in 2017, coinciding with the heel turn of her real-life husband and Impact announcer Josh Mathews. She competed in a #1 Contender's Gauntlet Match in April, reaching the final two before losing to ODB. Rayne left Impact in July of 2017.

Madison returned to Impact Wrestling on the November 30, 2017 edition, resuming her role as a villainess and competing against Laurel Van Ness and KC Spinelli in a Knockouts Championship tournament match, which she lost when Laurel pinned KC. 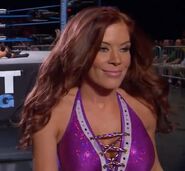 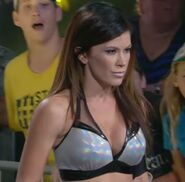 Retrieved from "https://femalevillains.fandom.com/wiki/Madison_Rayne_(TNA)?oldid=116768"
Community content is available under CC-BY-SA unless otherwise noted.