Madeleine can use her sexiness to seduce men or deceive them before striking.

An expert in close quarter.

At Mozambique Madeleine and the other members of Vortex planned the killing of the president. Madeleine lured English away from his post. Stripping to a bikini, she and English went in a jacuzzi, while a poisoned bodyguard shot the president.

As Fisher left the group, she and Simon got the keys back. As they planned the strike on the Chinese president in the stronghold Le Bastion, Tucker and English broke in the stronghold. Madeleine found Tucker, and used her charm to catch him off guard. She then used a knife to take him hostage and lead him away. As he disarmed her, she took his gun from him. Tucker flipped the light switch and replaced her gun with a banana. 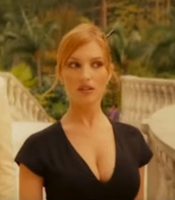 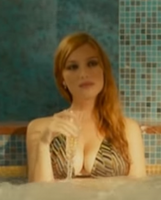 Add a photo to this gallery
Retrieved from "https://femalevillains.fandom.com/wiki/Madeleine_(Johnny_English_Reborn)?oldid=206536"
Community content is available under CC-BY-SA unless otherwise noted.