Start a Wiki
watch 01:48
The Loop (TV)
Do you like this video?
Madeline "Maddie" Sawyer (Cindy Busby) is the main villainess from the 2019 Lifetime film, The Wrong Stepmother (airdate July 5, 2019).

Maddie Sawyer was introduced as the new girlfriend of widowed Michael Stone, though the film's opening scene showed her in a hooded disguise attempting to enter the home of a past lover, who denied her entry. More hints of Maddie's psychotic demeanor were shown when she was outside Michael's home watching him and their daughters, Lily and Nicole Stone, and it was later on that Michael introduced his daughters to Maddie, who he met online.

Maddie quickly charmed not only Michael, but Lily and Nicole (despite the former's wariness), but while she was at the Stone household, she placed a camera inside one of the rooms, allowing her to watch and listen in on her new boyfriend and the girls. Later, Michael's co-worker, Cynthia, met Maddie for the first time, and she was left shocked over the relationship, as she was a longtime friend of not only Michael, but his late wife (and Lily & Nicole's mother), Amy.

Maddie's strange behavior increased Lily's wariness, leading to Lily voicing her concerns to Cynthia. Afterwards, Cynthia searched online for Maddie, and found a story about a woman who was terroizing another family, leading to Cynthia visiting the home. A young man named Tyler answered and revealed Maddie was dating his uncle, doing so under the name Claire Sullivan, after which she attempted to take over the house and terrorized the family. Following Cynthia's visit, she returned to her car and was confronted by Maddie, who had been following her. The deranged villainess lashed out at Cynthia and accused her of being jealous of Maddie because she had Michael, claiming that Cynthia failed to get Michael to fall in love with her, after which she strangled Cynthia to death and placed her in the trunk of her own car. She later approached Tyler and stabbed him to death inside his house.

Afterwards, Maddie continued antagonizing Lily by identifying herself as her and Nicole's mother, though Lily's protests to Michael came on deaf ears, mainly due to Maddie convincing Michael that she was just being warm and genial to his daughters. The delusional psychopath later obtained Lily's phone and changed her college admissions essay, which originally had Lily identifying her mother as her inspration, with Maddie removing the mentions of Amy and placing herself as Lily's inspiration. Lily learned this when her teacher, Ms. Price, expressed her shock and disappointment over LIly's essay, and after learning about its contents, she angrily confronted Maddie and outed her for changing her essay. Maddie admitted to doing so, again claiming to do so with good intentions, but she showed her true evil colors to Nicole when she snarled at her for using her phone--referring to Nicole as disrespectful before taking her phone away. She also engaged in a verbal spat with Lily, and regarding Nicole's plea for her phone back, Maddie stated that she wouldn't return it, stating that "she had to learn."

Lily's deeper search inside Maddie's past had her learning about her past actions as Claire Sullivan, as well as doing the same thing under the name Victoria--marrying a wealthy man and taking over his family before losing her husband under mysterious circumstances, giving the indication that Victoria killed him. Lily's visit to Tyler's home only led her to the business card of Dr. Cassandra Harris, who was revealed as Maddie's therapist. She visited Dr. Harris and informed her about Maddie, but after mentioning that she was a patient, Harris warned Lily about Maddie being dangerous. As it turned out, the evil Maddie followed Lily to Harris' office, and after Lily left, the villainess killed Harris.

Afterwards, Maddie went to Lily and Nicole's school to attempt to take the latter home, while introducing herself to Ms. Price as the girls' mother. Ms. Price refused Maddie's request and informed her that she was not the girls' mother, but Maddie spotted Nicole and took her back to the house. Lily and Michael returned home to find the deranged Maddie with her arm around Nicole, after which Lily revealed Maddie's villainous past to Michael. Maddie's attempt to deny the accusations fell flat, leading to the maniacal madwoman wielding a knife at Michael and Lily, while Nicole escaped. Maddie shouted that she would not lose another family, and she accused Michael and Lily of taking family for granted, while stating that they would go by her rules. At that moment, police sirens were heard, revealing that police were called before the confrontation, leading to Maddie's off-screen arrest.

An alternate ending to the film (which aired on July 11, 2019 as The Wrong Stepmother: Mother's Day), showed Maddie stalking another family after escaping the Stone household. She approached a young girl named Scarlet and introduced herself as Josie, after which Scarlet answered Josie's questions regarding her parents by stating that her mother had passed on. Scarlet's father later appeared, leading to Maddie/Josie introducing herself to her new intended target. 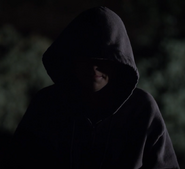 Maddie in her hooded disguise 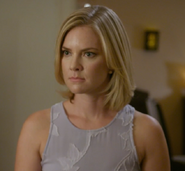 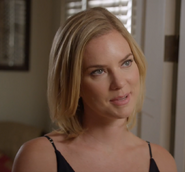 Add a photo to this gallery
Retrieved from "https://femalevillains.fandom.com/wiki/Maddie_Sawyer_(The_Wrong_Stepmother)?oldid=171040"
Community content is available under CC-BY-SA unless otherwise noted.