Madame Sargasso is the main villainess from "The Bermuda Triangle Tangle," the 12th episode of Jabberjaw (airdate November 25, 1976). She is an evil sorceress who uses her electro-magnetic powers to capture vessels heading past the Bermuda Triangle, and turns her captors into her zombie slaves.

Sargasso's latest captors were the Neptunes, who she brought to her evil lair. After thwarting the group's escape, Sargasso revealed that diamonds are her power source, and she planned to turn the group into her zombie slaves to dig for diamonds in the mine. She turns the entire group, except for Jabberjaw, whose girth prevented him from going through the chamber's effects.

After Jabberjaw frees the rest of the group, Sargasso recaptures them and brings them back to her lair. The villainess ordered them to bring back a powerful stone known as the Power Stone of Kabba, with the promise that she would free her captors after acquiring the stone. However, after the group brought the stone to her, the evil Sargasso reneged on her end of the deal, as she planned to use the stone to enslave the entire world. This made Jabberjaw and the gang very upset that they took back the stone and escaped with the group, with Sargasso sending her henchmen after them.

Later on, Shelly and Bubbles devised a plan to free the captors, which had Bubbles entering Sargasso's screen and posing as the sorceress. Bubbles, as Sargasso, ordered the captors free, and following this, the real Sargasso and her henchmen chased after the group. Sargasso used her belt to fire shots at the group and even shrink Jabberjaw, who later retrieved the belt and used it to trap Sargasso and her henchmen inside a ship-in-a-bottle. 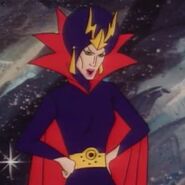 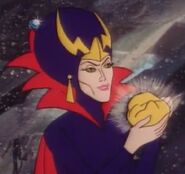 Add a photo to this gallery
Retrieved from "https://femalevillains.fandom.com/wiki/Madame_Sargasso_(Jabberjaw)?oldid=193808"
Community content is available under CC-BY-SA unless otherwise noted.